Many years ago the earth's continents were originally one big supercontinent surrounded by an even gigantic ocean. However, the supercontinent gradually broke up and scattered to become the continents we see today. There is now another split that seems to be occurring within the African continent. And surely scientists are paying attention to it. But what exactly does this division mean? Are we in any danger or is the world coming to an end as most suggest? Perhaps this occurrence has nothing to worry about. Join me as we dive deep into answering all these questions and more about the terrifying discovery made by scientists about Africa splitting into two.

Recently a massive crack in the Kenya Rift Valley caused a stir in the international media. Many reputable experts and scientists have actively worked to understand the cause of this odd and enigmatic fissure which seems to have emerged overnight. Though it might sound frightening to many, this occurrence is not new but it is unusual in Southwest Kenya. An enormous fracture that covered several kilometers developed out of nowhere. The Nairobi-Narok roadway recently collapsed due to the crack which is still expanding. 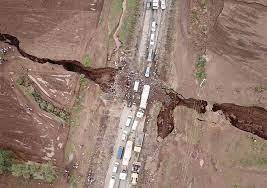 The East African rift's tectonic activity was linked with the crack's early stages. Gullies formed by erosion are one theory for why this happened. Questions remain though about why the split was created, where it did, and whether it has any relevance to the East African Rift. Numerous tectonic plates make up the earth's lithosphere. Which is composed of a crust and upper mantle. These plates don't remain stationary instead they move about one another at different speeds while gliding over a viciousAsthenosphere.

Although the exact mechanism causing their movement is still under discussion. It is believed that they involve forces produced at plate boundaries and asthenosphere convection currents. These pressures do not just cause the plates to shift. They also can rupture the plates creating a rift and possibly leading to the formation of new plate boundaries. One area where this is now taking place is the East African Rift System. The East African Rift Valley stretches over 3000 kilometers from the Gulf of Aden in the North towards, Zimbabwe in the South. Splitting the African plate into two unequal parts that comprise the Somali and Nubian plates. Activity along the eastern branch of the Rift Valley running along Ethiopia, Kenya, and Tanzania became evident from the large crack that suddenly appeared in Southwestern Kenya. 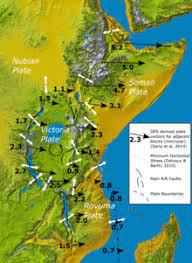 The 50-foot team and 66-foot wide chasm may have formed as a result of a bigger rifting system. But it is possible that the area's recent high rains exposed the fracture and caused it to suddenly develop a large area of volcanism. Seismic activity, ground uplift subsidence, and the development of fissures and cracks are all caused by the surface expression of the rifting. But what exactly causes rifting? A rift is caused when the lithosphere is subject to horizontal extensional pressure thus becoming thin. It will eventually break creating a rift valley in the process. Balkanism and seismic activity are surface indications of this process that can be seen along the rift valley if this happens. Rifts which are the first step of a continental breakup can result in the formation of a new ocean basin.

The South Atlantic Ocean which formed as a result of a separation of South America and Africa around 138 million years ago is an example of a location on earth where this has occurred. Extensional forces that are strong enough to split the lithosphere are necessary for continental rifting. The East African Rift is considered an active kind of rift where the circulation of the underlying mantle is the source of these stresses. The lithosphere beneath this rift is being lifted higher by the formation of a sizable mantle plume. This causes it to weaken due to the rise in temperature, strain, and break by faulting. 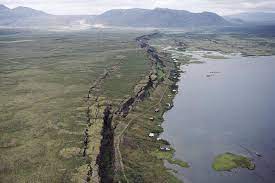 Geophysical studies have shown evidence of this unusual hot mantle plume commonly referred to as the African super swell. This superplume has been widely used to explain the anomalously high topography of the Southern and Eastern African Patos. Additionally, the superplume is widely accepted as a source of the pull-apart forces causing the formation of the Rift Valley. The topography of rifts is particularly distinctive, consisting of several depressions bounded by faults and surrounded by higher ground. From space, it is possible to discern the East African system as a collection of aligned rift valleys divided from one another by sizable bounding faults. Not all of these cracks develop simultaneously. But rather in a series that moved Southern into Zimbabwe at a mean rate of between 2.5 and 5 centimeters per year beginning in the afar region of Northern Ethiopia about 30 million years ago. Other rifting is mostly undetectable to us. The formation of new faults, fissures, and cracks as well as renewed movement along old faults as the Nubian and Summer Lake plates continue to move apart can result in earthquakes.

However, in East Africa, the majority of this seismicity is a very moderate size and is dispersed across a large area over the rift valley. Volcanism is an additional surface indication of the ongoing process of continental breakup and proximity of a hot molten as thinnest fear to the surface. The East African Rift is exceptional because it allows us to see many rifting stages along its length. The rift is young in the South where extension rates are low and faulting is widespread. There are few earthquakes and volcanoes. However, the rift valley bottom is entirely covered with volcanic rocks as it approaches the FR region. This shows that the lithosphere has nearly completely broken apart in this region due to the lithosphere being fed. When this occurs, magma will start to solidify and the gap left by the broken-up plates creates a new ocean.

Over millions of years, a tiny shallow sea will start to separate the Eastern edge of Africa from the rest of the continent. There is a good chance that this island will include portions of Ethiopia, Somalia, Kenya, and Tanzania. Scientists have been aware of the rifting in Africa for a while but the exact cause has been difficult to determine. 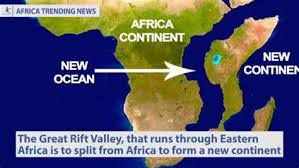 The earth is an ever-changing planet. Even though in some respects change might be almost unnoticeable to us. Plate tectonics or the East African Rifting is a good example of this. The riffing is a very slow process but most of the time goes about splitting Africa without anybody even noticing. While this sounds frightening the timeline for that is extremely long-term. Thankfully scientists estimate that the rifting process in Africa will take tens of millions of years as the crust begins to thin and sink and a small seaway begins to intrude. The rifts zone eventually forms a huge ocean separating the continent into two. So if you're already in shock hold your breath since none of us or our children's generation will be around to experience the spectacular occurrence.