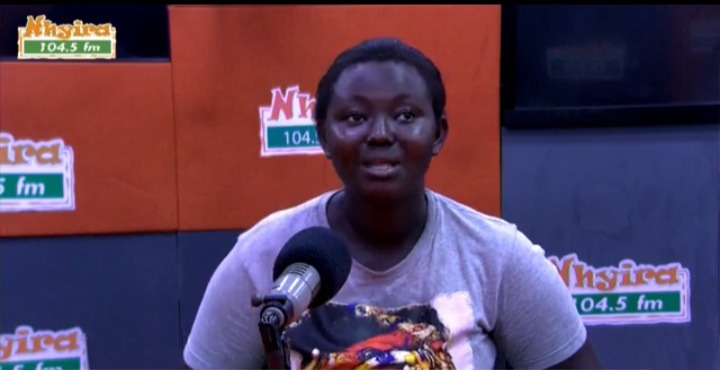 A young lady by the name of Doris Amankwa in an exclusive interview has shared what her niece told her boyfriend after she used her phone to call him. According to Doris, she was staying with a woman at Takoradi when she met Isaac. She got an issue with the woman so she came back to stay with her family members at Oforikrom.

Isaac came to visit her in Kumasi and her family members gave them their support to be in a relationship. Isaac promised her that he will rent a room for her and also get married as soon as possible. Some months later Doris went to visit Isaac at Takoradi and she got pregnant. When she was 8 months pregnant she travelled to her hometown at Abobigya.

Doris continued that she went through surgery during delivery but Isaac did not sent her any money to pay for the hospital bills it was her mother who paid for everything. The lady continued that, her phone got spoiled when her baby was 5 months old but all this while Isaac did not come to visit them due to financial problems.

Doris then used her niece called Lydia cell phone to call Isaac to send them money. Some days later her niece brought her phone to her that Isaac wants to speak with her, Doris said the moment Isaac heard her voice, he started insulting her that she doesn't keep herself clean and also accused her of sleeping with different men for money.

The lady said she was surprised about what her boyfriend told her, what marveled her was that the guy doesn't know or speak to anybody at where she is staying apart from her niece. She then asked Lydia the following morning about what her boyfriend told her but she denied that she is not the one who has been telling him those things. The next morning, a man came to their house to give her GHC20 to buy pampers for her baby,

At that time it was only Lydia who was with her. Isaac again called on Lydia's phone in the evening and told her that he has got information from her niece that she had an affair with another man and he gave her GH20. Isaac continued that he doesn't want to continue with their relationship due to how she has been sleeping with different men but she should permit him to date Lydia.

Doris got furious and went to ask her niece about what was going on between the two of them but she denied that she is not in a relationship with her boyfriend. Isaac too said what Doris is saying is never true, he doesn't know Lydia in person so he can't date her but he has been getting information about everything her girlfriend has been doing at Abobigya.

Akufo-Addo Finally Listens To Mahama, Goes To IMF, Check Out What He Said About Mahama In 2015