Check Out What A Jealous Boyfriend Did To His Beautiful Girl With Acid.

By MdkBanahene (self media writer) | 3 months ago

The world we live in right now is full of wicked people, because a lot of incidents happening these days in various relationships tells a different story all together about the real meaning of love as people don't seem to understand what it take to love someone before entering in a relationship.

There is this particular saying and clearly it is true that, no one will ever marry his or her enemy so I don't understand the reason why there has been a rise in causing damages to partners of which some go to the extent of killing. Because personally, I think these things keeps happening due to the failure of one to control his or her temper in cases of misunderstanding.

You will be very heart broken to find out what a jealous boyfriend did to a very nice beautiful girl with acid. A particular young lady who goes by the Grace Amedzodo has suffered from one of the most toxic chemical substance (acid) in the hands of allegedly, her boyfriend whom she has two kids with.

According to the girl's narration to Crime Check TV, her boyfriend whose name was given as Bright has been on her nerves all the time causing so much troubles and conflicts in their relationship claiming that she cheats on him. According to Grace, the day before the tragedy, they had a serious misunderstanding of which Bright said to her that, she should stay away from men and for that matter, she should wait and see until she become like an old woman.

Well Grace took that threat for granted assuming it is a usual way of expressing his anger. A question one may ask is, was she really cheating or what? Well, I can't tell that for now. Later night after that threat, Grace got awakened by some burning sensation on her, she creamed for help as a friend of her boyfriend came into her rescue as Bright was still away that night. 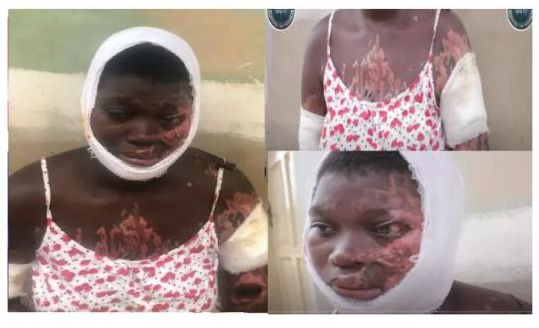 He told Grace what has happened to her as he let her know it's an acid someone has poured on her. The friend called Bright to inform him about the accident. "On a loud speaker, I heard Bright saying he was at Kasoa but within seconds he arrived. How could he have travelled from Kosoa to Ashomang Estate within such a short period of time?" a suspicious Grace asked.

She was then sent to the hospital for some treatment but due to financial difficulties, she couldn't afford for the surgery she was supposed to do so now everything is getting worse as her body seems to be rotting. Crime Check Foundation is now mobilizing some funds to support the treatment but for the mean time, the girl together with her two kids is now a burden on her aging mother.

The guy known as Bright who has now been accused of the incident, has rent out the kiosk they used to sleep in as he is ready to raise funds for the lawyer he has hired as the case will be heading straight to court.