An American woman has shared the sad story of how her husband took his life after he was mistreated and allegedly framed by his friends.

The woman shared the story of how she met her husband, Sylvester Mumba, during a vacation she took to Zambia in 2012.

She expressed that six months after her vacation ended she started dating Mumba and decide to come back to see him in Zambia for a month. Zambians in diaspora are jealous of each other - US lady shares heartbreaking love story

According to her when she visited Livingstone, Zambia on vacation in 2012, she ran across Sylvester Mumba. In Livingstone's Mukuni park, Sylvester used to sell wooden goods. He was a certified wood maker who specialized in the creation of modern woodcrafts as his occupation. 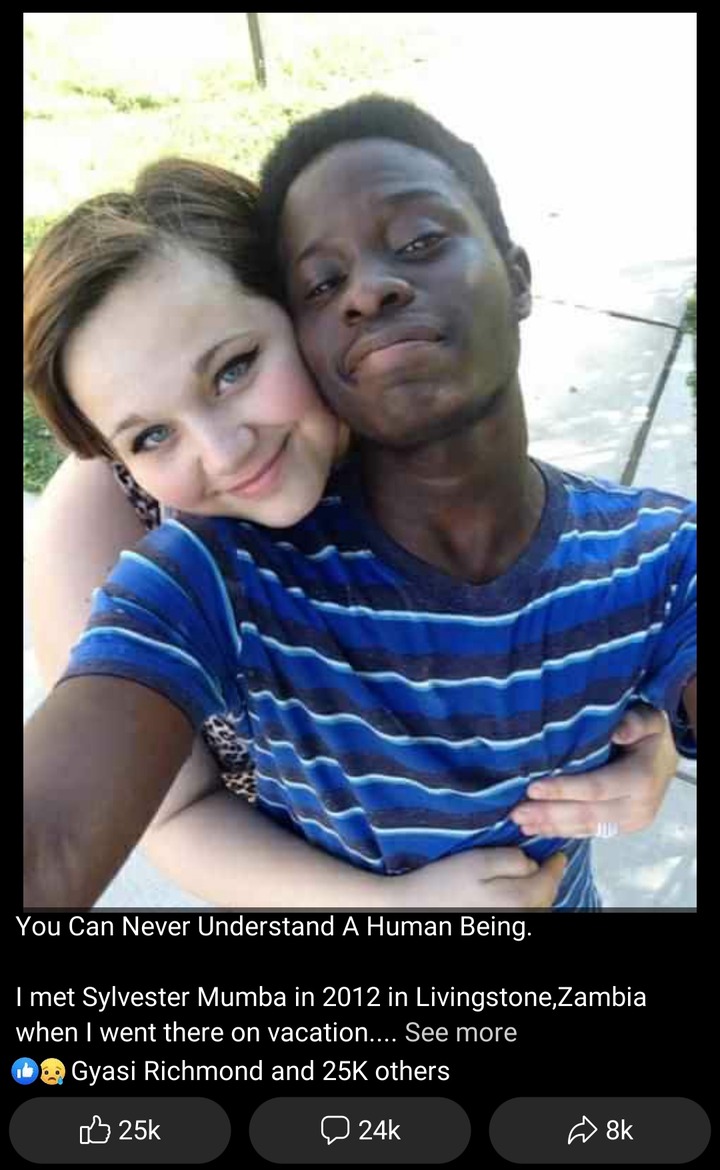 " She request him to make A wooden map of the United States of America with our names painted on it was how I got his phone number. After that, he became a close friend with whom I kept in touch even after I returned to the United States.

When I met him, I was 23 years old, single, and miserable. I called Sylvester whenever I was sad or depressed. We'd have nonstop conversations for hours on end. While his English was shaky at best, I was able to decipher all he was saying. In the past, he'd tell me things like "we were destined to be because only I could understand His terrible English."

Six months later, we began seeing each other. To see Sylvester, I flew back to Zambia with the money I had saved working as a Host at a Steakhouse. I went to a travel agency and bought a plane ticket. At the time, the round-trip ticket cost $1,357 USD.

It took us less than a month after I arrived in Zambia to tie the knot. Then, following the nuptials, I flew to Zambia and abandoned him there. Back in the States, I hired an Immigration attorney to assist me with Sylvester's visa paperwork. Sylvester moved to the United States in May 2013 after being granted a green card. Another wedding was held in the United States, and this time it was for us. We had been madly in love for a long time.

Our marriage was going strong. In fact, I assisted him in obtaining employment at one of Target's retail locations and in purchasing a car so that he could get around more easily. Slowly but surely, he began to blend in with the locals and his command of the English language improved. He also made friends with a group of Zambians who were residing in the United States, and the two groups merged into one.

As time passed, we began attending events hosted by the Zambian community in the United States. Zambia National Soccer Team vs. Japan was a thrilling match that I attended in person in Tampa, Florida. As well as attending a celebration following the soccer match, we also talked with the players and other guests in attendance. 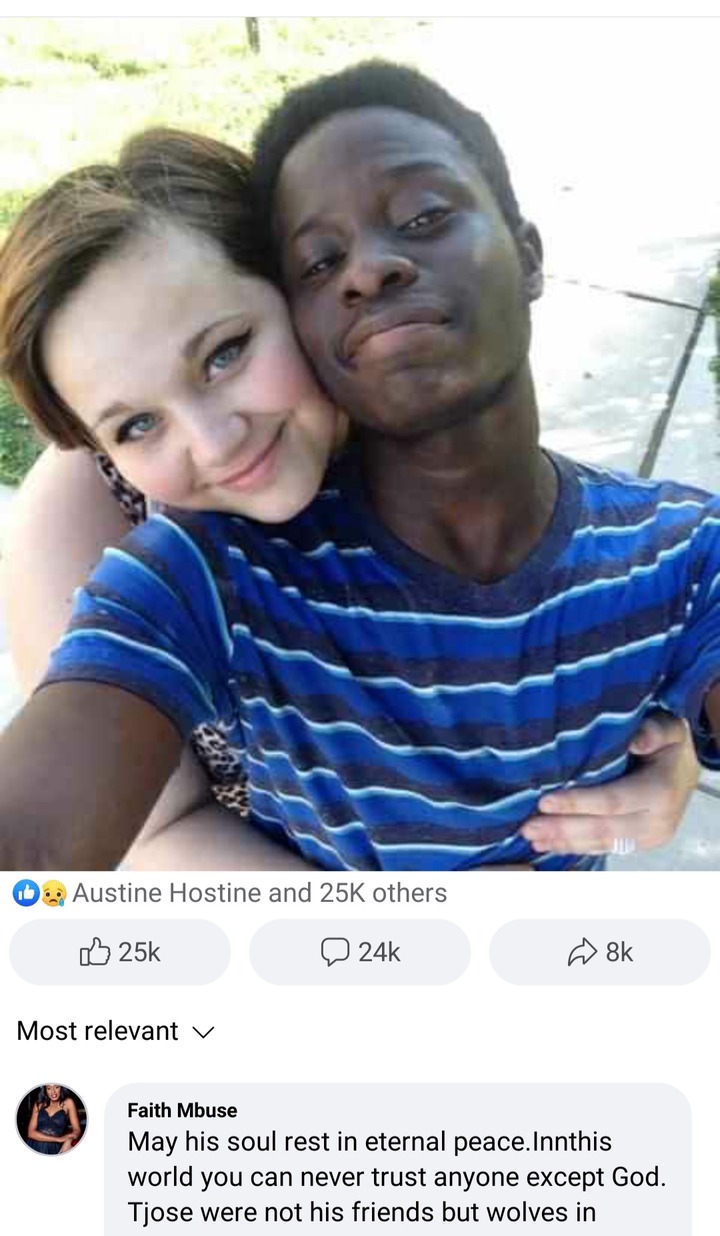 I've been to a lot of celebrations of Zambian independence that the Zambian community in Atlanta has put on. One thing I've seen is that Zambians in the United States like Gossiping and dislike seeing their Zambian (Friends) succeed in life. 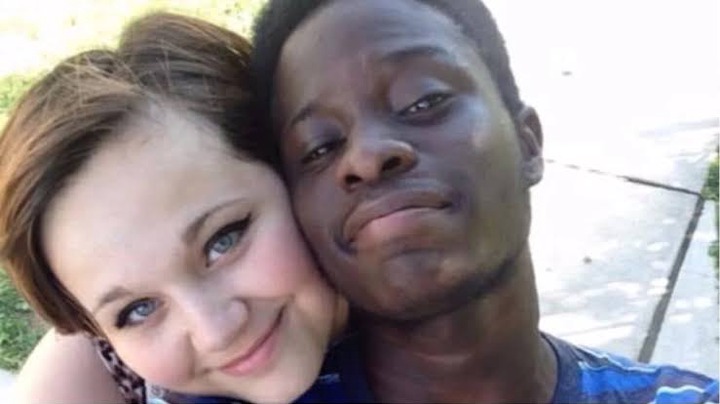 They would tell me that he married me out of need rather than love since he was poor and didn't have any other options (Green card).

After a while, they told me that they saw him talking to individuals in the Zambian community about how he was simply using me to get his green card and would be leaving once he got it, which would be in ten years.

It was not uncommon for his Male Friends to contact begging for s x or to ask me to divorce him and marry them instead. I didn't give a rip to what other people had to say about me.

To me, he meant the world. I was in love with him. To this day, I'm perplexed as to why Zambians living abroad are so envious of one another. Because she married a Nigerian man, my step-sister is part of a large Nigerian family.

Our marriage was being harmed by the gossip of the Zambians in the United States, so Sylvester and I made the decision to cut ourselves apart from them. We were overjoyed until Sylvester was arrested for narcotics possession in June of this year. With a few of his close Zambian friends, he went out to drink.

When it got close to midnight, they all agreed to call it a night. Because Sylvester was the only one with a driver's license, he was responsible for dropping off his buddies at their various residences across town. And a police car pulled him over after he dropped off his pals and was driving back home when he was arrested (Police Car). His pals smuggled cocaine into his automobile and then reported it to the authorities.

And this is how he was apprehended in June and returned to Zambia as a result of his actions. About a month and a half ago. In spite of my best efforts, I was unable to stop his deportation for four months due to the stricter immigration regulations enacted under the present administration.

Minor thing result in deportation. Unfortunately, his buddies have been pleading with me to go on dates with them ever since he was taken into custody. Sylvester had just been out of the country for three weeks when he took his own life."