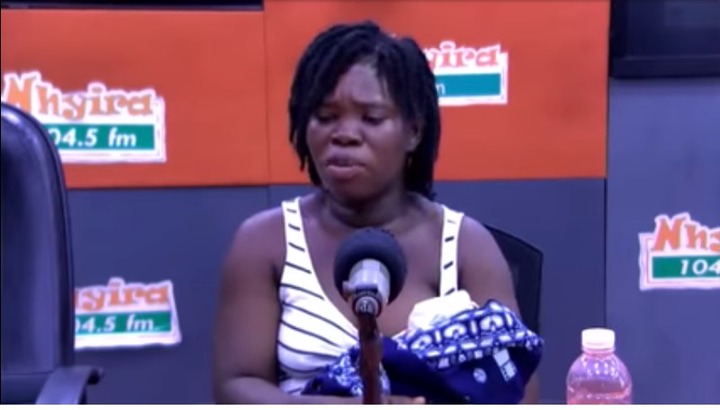 A 28 years old lady named Adwoa Sarah opened up on what transpired after she had a sexual encounter with her ex-boyfriend a year ago. The lady said she is from a family of 16 but she dropped out of school due to financial problems her parents were going through, they could not afford the cost of their school fees and the books they need at school.

Sara said she joined her mother in selling at the roadside to sustain her till she grew up. One she came across her fiancee who promised to marry her and get her a better job to do. Few months after they got into the relationship, her fiancee lost his job but she supported him with the little money she had till he got employed in a reputable company at Dunkwanta.

Sarah claims her fiancee fell sick and was not able to go work again, she sent him to her pastor who helped him to recover. After he recovered she noticed that the man used to hide her belongings from her friends and also told his parents that he is still single. Due to the man's behaviour, she packed her luggage and went back to her hometown. Her ex-boyfriend whom she broke up with him years ago too came to plead with her to accept him back.

Sarah says she accepted his apology and went to sleep with him that night but she later found out that she has conceived for him. A few months later she received information from her friends that her fiancee was dead. She went to the man's family house to help them in the funeral arrangements. After the burial of the fiancee, her ex-boyfriend that she reconciled with started maltreating her and also accused her of killing that man which were never true.

She became angry and went to a river at their backyard and invoked a curse on him with the intention of letting him suffer in life. But six months after she conceived for her boyfriend, the curse started working against her, she was not able to have a sound sleep but always dreamt of sleeping in a coffin. She became terrified and went to a fetish priest to perform some rituals for her to have a sound sleep.

The lady continued by saying that, she had a safe delivery but she began to have that bad dreams of sleeping in a coffin on so many occasions. She then confessed to her boyfriend about how she cursed him at the river, the boyfriend too became angry and abandoned her and has decided not to support her to take care of their child. Sarah made it clear that she wants help to revoke the curse, also she expects her partner to be a good father to their child.