15 Telltale Signs He Isn't in Love With You

By KwadwoSarfoGh (self media writer) | 17 days ago 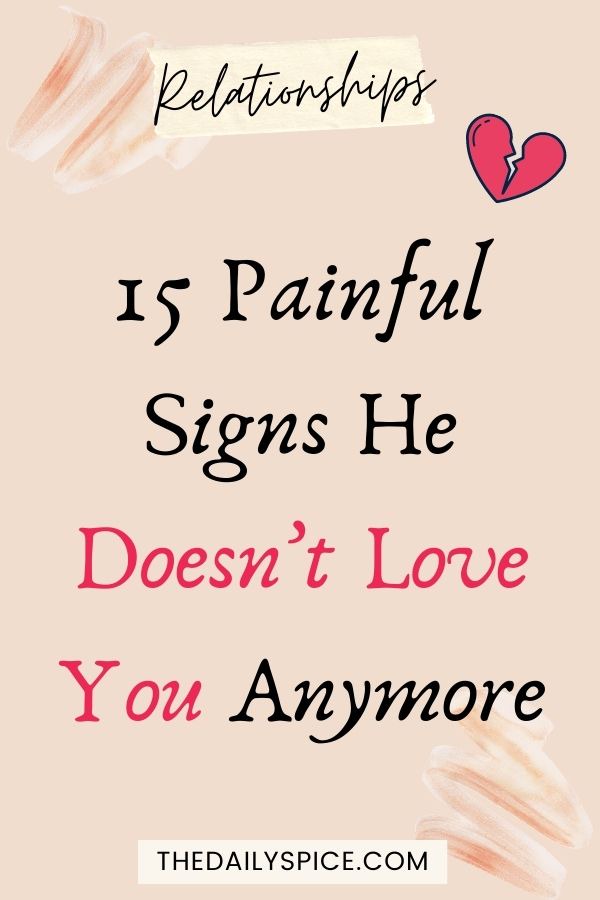 Today we’ll look into some of the signs he doesn’t love you anymore. If you’re starting to notice that your relationship isn’t what it used to be, despite all your efforts, and you feel like he doesn’t care anymore, it’s perhaps time to re-evaluate.

Lately, he hasn’t been talking to you as usual. It’s more like he is becoming withdrawn; he doesn’t text or reply to your messages and whenever he does, he just replies with a one word syllable, “okay”.

Are you faced with this situation or something similar? You might feel your man is pushing you away and doesn’t want to be with you anymore even if he hasn’t said it outright. Perhaps you’ve noticed some changes in him that you just can’t explain.

Do you want to know the signs that he is indeed no longer in love with you? It might be painful (okay, it will definitely be painful) but it sure is better to know so that you can define where your relationship stands.

Signs He Doesn’t Love You Anymore

This is arguably one of the most painful signs he doesn’t love you anymore. Communication is key in every relationship and whenever there is a lack of it or it isn’t effective, the relationship has a higher tendency of falling apart. Effective in the sense that he is not ignoring you but the interest to talk that he used to have just isn’t there anymore. Note that this includes both verbal and non-verbal communication.

2. Giving unnecessary excuses to avoid you

So normally, you guys loved being together at all times but nowadays, he gets irritated at your every breath, not to talk of hanging out together; girl, this is definitely a bad sign.

Also, if it has come to your notice that somehow you cannot run into each other despite being in the same house, you should know that it isn’t a coincidence. He may just be giving you an indirect signal that he wants out.

For instance; excusing himself to pick a call, not allowing you have access to his phone as usual, tilting his phone so that you won’t be able to see his messages when you sit beside him, going out without letting you know of his whereabouts and whenever you ask him about it, he “puts you in your place”.

A guy who loves you would tell you most things and would not want to hide anything from you but if that is not the case and he doesn’t love you anymore, he would feel like he has no duty or obligation to let you know and you have no right to question him.

To him, his feelings for you and the time you guys spent together are in the past now. This is definitely a bad sign and you should as well take it seriously.

5. He gives you little or no attention

Another one of the signs he doesn’t love you anymore is that he does not want to be involved in your life. Whenever you want to talk to him, he says he’s busy and when he does, he doesn’t even give you attention; he avoids your eyes, probably picks up his phone while you “rant and ramble”.

Perhaps he no longer asks you how your day went, how you feel, or even take you out on a date. He prioritizes little things over you and says no to any suggestion you make that might try to revive his feelings for you.

Another case is him being weirdly quiet when you know you did something that would have made him angry. This could be tricky though. He might be holding in his anger and waiting for the perfect time to explode or he might just be totally uninterested in whatever you do.

Special events such as your birthday, valentine’s day, anniversary and other special days are rarely forgotten by those that cherish you, not to talk of the person you are dating. Also, if on his birthday, he decides to spend it with his friends and does not give you any time throughout the day, this is a sure red flag.

Although we cannot say all men do this because they might push for the fact that they believe in actions rather than words, quite a number of them do. Words of affirmation of love soften a partner’s heart, so people tend to use it a lot.

The absence of loving words such as “I love you”, and “I miss you” for a very long period of time, with no action to be meted out in its stead, is a big but sometimes subtle sign he doesn’t love you anymore.

8. He does not care about your feelings

Regardless of what a man is going through, he would still care about his lady’s feelings. He might not be as sweet and loving as usual, but he would still try to know what’s going on with you. He would comfort you and try to make you feel better.

9. He doesn’t want to have anything to do with you in public

When your man does not want you to be seen with him in public, or doesn’t introduce you as his woman to his friends but just wants to keep it between you two in private, it could be a sign that he doesn’t love you enough and is trying to opt out of the relationship.

10. He blocks you out from contributing in decision making

Before now, anything that was agreed upon was a mutual decision. But recently, you often try to guess what’s going on in his mind. He does not tell you about any project, work or anything regarding him, he just wants to do it all by himself and for himself. Those feelings of togetherness and connection he once felt with you are all in the past now. This is definitely not a good sign.

11. Being rude with his words

He starts to use harsh words on you without caring if he is hurting your feelings. He doesn’t filter his words, he just says them the way he wants and sometimes, he does this intentionally. Also he might reply to you in a sarcastic manner. For him, all he knows is that he wants to leave the relationship but might not know how to put it in words, so he just uses this impolite behavior to blurt out his feelings.

12. He begins to compare you with other women

With any little flaw you make, he uses that as an opportunity to bring up other women, especially his ex. No man who loves his girlfriend or wife would compare them with any other; instead he would learn to accept her flaws, while helping to make her a better person.

13. He looks for every opportunity to disagree with you

When he starts picking on you at the slightest chance – for example, “you didn’t place the flower vase properly” – and then blows it out of proportion, you should know that something is definitely up. He might be going through a phase but when this becomes a predictable and consistent action, there goes up a red flag warning you that something is not right with his feelings for you.

14. He stops apologizing for his wrong doings

Even though he is aware of what he did wrong, he ignores it totally and does not apologize. While on the other hand, he wants you to apologize quickly and if you don’t, he might use that as a reason to break off the relationship.

Just any reason becomes good enough to pick up a fight with you – one which would eventually lead to a 3-day misunderstanding. Oh! You broke his glass mug? That makes it a 7-day fight. All in all, this is another red flag that shows that he does not respect your feelings or your opinion on things.

Each person needs his\her own space from time to time to think and reflect, or just “me time” and this helps a lot in many relationships. However, when either side starts to crave their alone time more than usual, then something is wrong and needs to be addressed.

If your man starts behaving this way, it is either he is stressed or carrying a burden that is obviously too heavy for him to bear alone. And for the unpalatable part, he probably wants to opt out of the relationship asap.