In a weird article that was posted on Punch Newspaper Facebook page this evening, circulating all over the social media, a young man who felt there is no other way for him to control his sexual urge explained how he managed to remove his testicles.

According to him he said he decided to remove the second testicle because of his religious beliefs. Because of his sexual urges, he had his second testicle surgically removed. He explains that the issue of a man's sexual desire while he is still unmarried is more like torture and a struggle. If care is not taken the man might misbehave and go out of his ways and do the unthinkable. 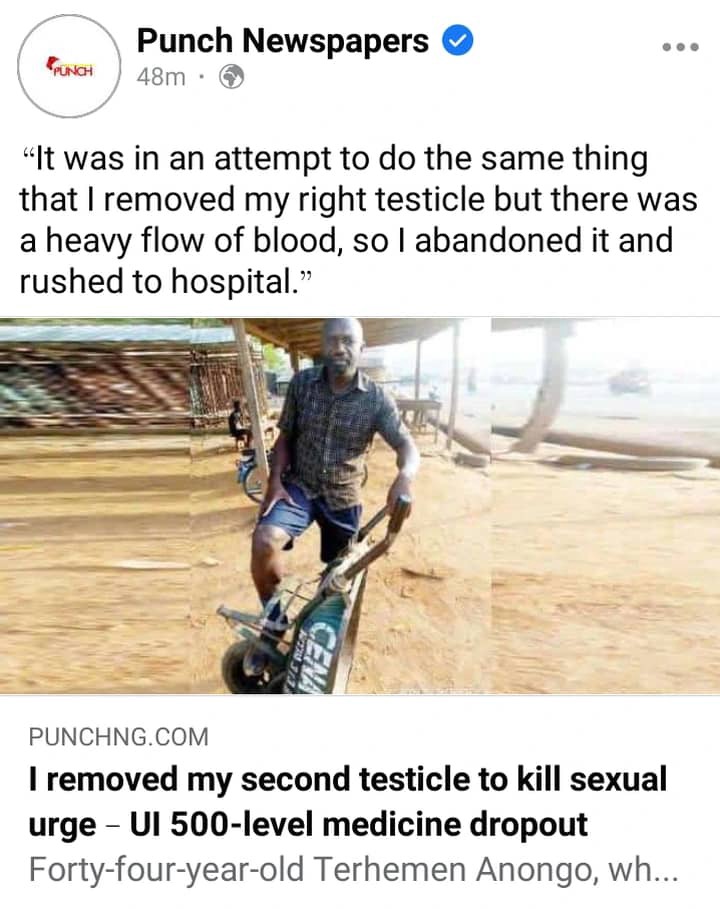 He explained that the combination of his sexual urges and his religious convictions drove him to decide to have his second testicle removed. He claimed to be someone who is extremely religious and has read about Origen Adamantius, according to him. He didn't want have urge & anything to do with women untill he's married.

Egyptian church leader Origen Adamantius paid to get castrated so that he wouldn't feel the impulse to have sex. According to him, he amputated his right testicle in an attempt to mimic the Egyptian guy. He said that removing it resulted in a large amount of blood loss, so he abandoned the procedure (castration) and ran to the hospital. Using the knowledge he gained from the removal of his first testicle, he was able to successfully remove the second one. What he doesn't know is that he may never have sexual urge again in this world I wonder how he will get a woman pregnant and the kind of torture the wife will go through. As a human you would you for any reason have your sexual testicles removed just to stop urge.

His Ghost Has Been Chasing Me; I Can't Sleep; Let Me Confess - Kumawood Actor Cries For Help.