The speed with which young couples fall into a marital crisis is worrying. A Nigerian woman identified as Ms. Ijeoma Sandra Aweye came to the human rights department and contacted Limosho Justice in Lagos that her husband did nothing when she married him. According to the woman, she was the one who paid for the wedding. She also gave him money to pay the bride price. She did it because she was 36 years old and was desperate to get married.

Her husband is known as Mr. Aweye Jude Agim. He was unemployed and did nothing. Her younger cousin brought her to marry Mr Jude Aweye. She agreed to marry him even though he had nothing. The woman feeds him and takes over all family expenses. She protected him and paid for her children's school fees.

When the husband's mother died, she gave money to her husband to cover the funeral expenses. She couldn't get along on the day of the funeral because she wasn't allowed to leave her job. Men and children go to the village for funerals. They did not return after his mother's funeral. The woman visit him in the village. When she reached the village, her husband refused her access to her children.

Even so, the man will ask about their school fees. But he refused to return to the city of Lagos.

The marriage is not yet broken, but on the brink of collapse. Human rights and access to defenders of justice, the Limosho branch in Lagos, must be careful. The root cause must be found.

Human rights defenders and access to justice called Mr. Jude Aweye, but he chose his claim. They called Jude's brother and told him about the complaint and asked him to tell his brother so he could answer their calls and tell him his own version of the case.

Human rights and access to justice defenders, the Limosho Lagos office, posted a video on their Facebook page in an attempt to resolve the issue. 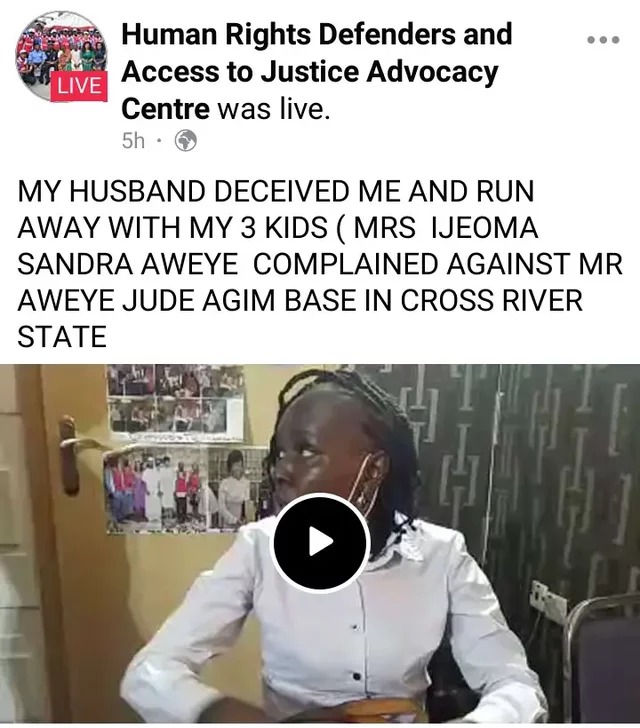