The courtship dance of the Wodaabe

As opposed to the general practice in most African cultures where the woman gets to do pageantry, and the men get to choose their wives. The wodaabe tribe of the Fulani has a cultural practice where the men play the display, and the women get to pick their husbands. The Fulani ethnic group is one of the prevalent ethnic groups in Africa, popularly known for its inability to settle one place. They are living in many parts of western Africa. Nigeria, Chad, Senegal, Niger, and Sudan. They are the nomadic cattle rearers, always in the move in search of greener pastures. The wodaabe tribe is one of the subgroups of the Fulani, and wodaabe translates as “people of the taboo.” Wodaabe man wakes up on the Sahel desert, with his shelter and his castles and donkeys as possessions. 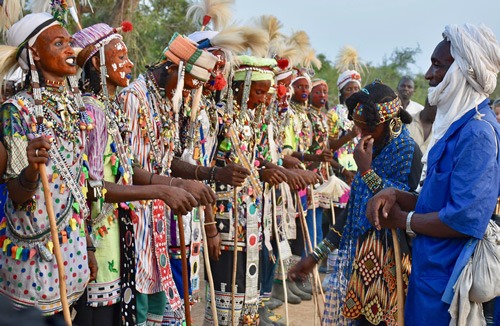 Birds do it. Bees do it. In the Wodaabe tribe of Niger, the human mating ritual takes a page from nature’s book. The Guerewol is an annual ritual and competition that sees young men dress up in elaborate ornamentation and traditional face paint and gather in lines to dance and sing. The goal is to get the attention of one of the judges a marriageable young woman. In this particular tribe, the male beauty ideal is all about bright eyes and teeth, so men will often roll their eyes and bare their teeth to show off their sex appeal. At the end of September, just after the rainy season and before spreading out in small family bands into all four corners of the Sahel, clans of the nomadic Wodaabe tribe gather collectively to celebrate their traditional Gerewol Festival. It is a time to socialize, hold tribal meetings, baptize babies, barter over dowries, or help each other out if needed. But above all, it is an opportunity for the young to meet, date, mate, and marry. The Wodaabe, also called the Mbororo (meaning: those who live in cattle camps), are a small subgroup of the larger Fulani ethnic group living in many parts of West and Central Africa, stretching from Senegal to The Sudan. 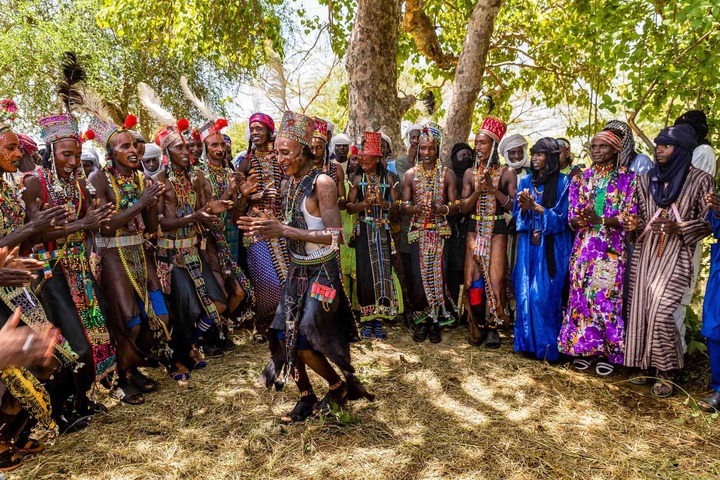 They are nomadic cattle herders, always on the move in search of greener pastures, and usually not staying longer than a few days in one given place. They are particularly famous for their annual Gerewol Festival an extravagant display of beauty contests and courtship rituals in which hypnotic chant and dance, and elaborate attire and make-up are the key ingredients for attracting the admiration and affection of potential love mates.There is one major twist, though: the Gerewol contestants are, unlike in most other beauty pageants, young and handsome males, and their judges are young marriageable females often still in their teens who evaluate the men carefully on their charms, dancing skills, stamina, and appearance, before slowly zooming in on their most attractive pick. It may remain a playful flirtation, it may lead to a night of love, or it may turn into a serious marriage proposal. Whatever the outcome, there will not be any social stigma attached, since a young woman’s virginity is not a major concern of the Wodaabe. Many Wodaabe girls and boys have already been pledged to each other in infancy by their parents, often to cousins, to preserve the traditions to which they fiercely hold on. Among the polygamous Wodaabe it is fairly common to temporarily hook up with someone else, or marry more than once, twice, or even three times.

Also, since beauty is highly valued in their culture, a married man who is not particularly handsome may encourage his wife to sleep with a more handsome man in the hope she will bear a beautiful child.