By Abigail.blog (self meida writer) | 17 days 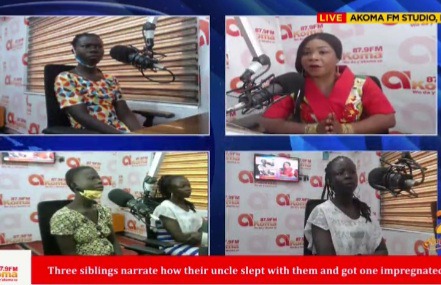 Three siblings appeared on Live TV from Akoma FM on how their uncle called "Wofa" Daniel who is about 50 years slept with all three of them and got one pregnant as a result. Margaret who is 20 years is the first and the eldest, Ama Kyei who is 18 years old is the 2nd and is the one their uncle impregnated after sleeping with her 4 times, the 3rd girl is also called Dorah and is 22 years old.

According to Margaret, she was a virgin before her uncle did this to her. She said she was in the house when her uncle came to call her to go and sweep his room for him. She agreed and went with him to sweep the room since he is her uncle. She entered the room started sweeping and her uncle came to push her onto his bed. She says she asked him why that and he boldly told her he wants to sleep with her. She told him she will tell her mum and her uncle told her she will kill her and cut her mother into pieces if she does. He still forced her and did whatever he wanted to do with her.

Ama Kyei who is the second and the one who "Wofa" Daniel impregnated says her case is similar to that of her elder sister. For her, she was there one day and someone came to call her that her uncle is calling her. She went and her uncle told her to lay his bed for him. She did and upon leaving his room, her uncle locked his door. She started crying and her uncle told her not to shout else he will kill her. He pushed her to the bed as well and had his way with her. She said this went on for three different times and now she is pregnant.

Picture of their Uncle 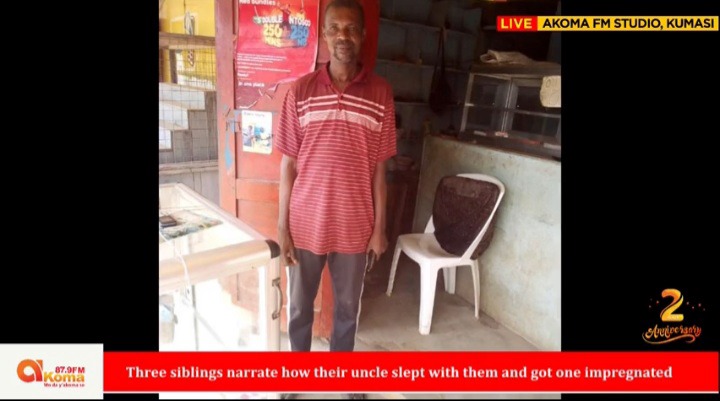 According to the 3rd girl called Dorah, she also passed through similar situation but for her she isn't pregnant but traumatized with her uncle's behaviour and how he always threatens to kill them and their mother.

Their Uncle was called by the host of the program and he admitted to tha fact that he committed such an abominable act and therefore regret doing that to his cousins and therefore begs for forgiveness. This happened at Efijase Dadease.