By Richardboateng123 (self meida writer) | 25 days

The hookup girl was narrating the story to a friend but unfortunately, the audio got leaked. She was narrating how she ends up in a hotel room in Dodowa after going to do a hookup business with a customer. In the audio, she said the guy got her number through a WhatsApp group she joined and the guy chatted with her showing his interest in her hook-up business and they agreed on the price and where they were supposed to meet and have fun together.

According to the lady, the guy told her that there is a nice hotel at Dodowa so there should meet there, so the guy called her and told her the name of the hotel. She took only her lorry fare to that place only because she thought she will get money after the hookup so she didn't make enough money. She met the guy at the nice hotel at Dodowa and they went straight to one of the rooms and she thought the guy has made the payment for the hotel room already. Not knowing the guy told the receptionist that he should come to their room after some time and take the money.

The lady said they entered the room and started chopping and enjoying themselves in the bed. After the guy chopped her, she was dozing off so she decided to sleep for some time because she was tired. When the guy realized that she has slept she sneaked out of the hotel room without telling her. When she woke up she thought has gone down to buy something so she was still relaxing.

Then the receptionist came to the room telling her that they have not made payment for the room so she tried calling the guy but his phone was off. She was not having any money on her and she begged the receptionist that she has nothing on her and she told her that she is a hookup girl. The guy brought her here to hook him up and get paid after that and she cried telling the receptionist to let her go. She did a recording to one of her friends on Whatsapp to send her some money to come home and she told her what has happened to her at a hotel in Dodowa. 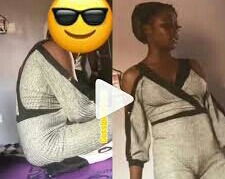 One of Ghana's Millionaire's Daughter, Has Been Going On Luxurious Trips Just To Have Fun