Ewe man lay embargo on Ga language in his house, asked Wife to Stop speaking it to their children.

An Ewe man lay embargo on Ga language speaking in his house. Warned the wife never to speak Ga to their children still the time he like as man of the house. Can you imagine?

News cited on social media precisely "Manokekame" Facebook page indicate that an Ewe man got married to a Ga woman. In fact they had been married for 5, almost 6 years now. Though the woman came into the marriage with a boy who is 10 now and that is not the problem. When the wife gave birth to their first girl, she started teaching her Ga and told him (her husband) to learn and speak it with them. The husband said it's not necessary because no matter what, he will speak English with his daughter though he have made her understand a few Ewe words. Their second child is a boy and a year old now.

The problem now is his wife likes talking to the kids in Ga even when he (the husband) is around and she doesn't see anything wrong with it. When he complained, she used to tease him and that's why she wanted him to learn it. It looks as like the man don't like the teasing and told her to stop. So he advised her to at least speak to them in Ewe (which she's very fluent in) or English for them all to understand but she's just refusing. "Asem a ba." 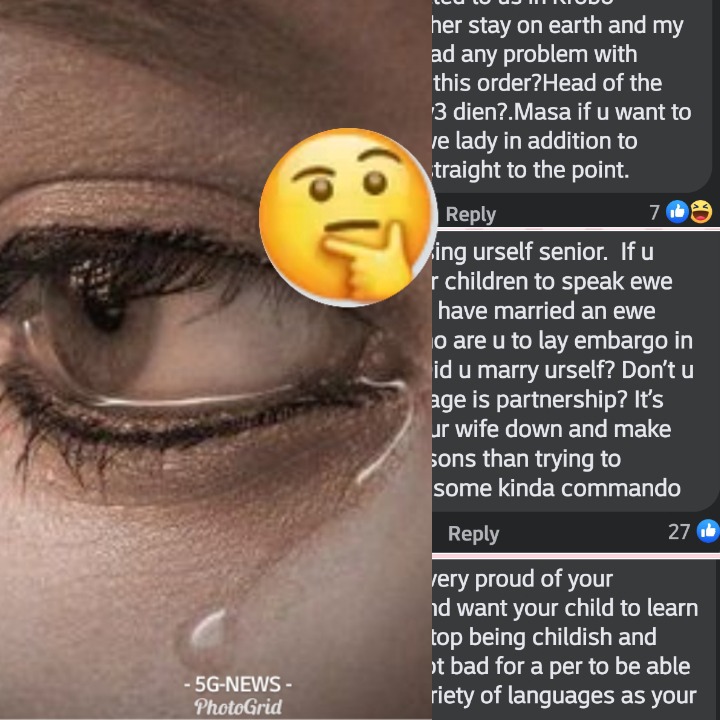 Here and again the argument led the two lovers into a slight misunderstanding (nothing serious though) but the wife decided to stop talking to him for no reason. The only means she could talk the husband is; she'll tell the girl something in Ga and tell her to go and tell the father. The husband is now worried because he is thinking she may end up putting some things in the children's heads.

"I've told her that I'm seizing the speaking of Ga in the house with the kids until I decide to stop. We are speaking either Ewe or English and as the man of the house, my rules stay." - The husband muttered. But now the wife is saying he is being petty and making mountains out of molehills. Meanwhile the husband is really serious and emotional and that is why he shared his problem as the says goes; 'problem shared is half solved'. Hmm.

Finally finally how Ghanaians are reacting to the story one could say the man is at the loosing side.

Dear reader thank you for reading!! Do you think the man is right?