Must Watch: Update On The 22-Year-old boy Who Was Born A 'Monkey': Now A Blessing To His Family

By SamColeNews (self meida writer) | 16 days The 22-year-old boy born a money

Sometimes in life, though the unexpected thing happens, in turn, it becomes a life-changing opportunity for some people. This is how the story of a 22-year-old boy who was bullied and referred to people as a monkey has changed the life of his family.

According to this boy's mother, her son was always bullied and referred to a lot of names in their community. The young was always seen running into the bush and hardly stays at home. He feeds on leaves and other plants as food. His situation made the people in his community wonder which kind of creature he is and as a result, call him a monkey.

Though this 22-year-old boy is seen as good for nothing in his community his mother sees him as a gift from heaven to her. One of his mother's wish was to see him going to school, but with her son's disability, his brain capacity is very low to process anything. He hardly talks and cannot think right but with all his disabilities, he is harmless.

The mother asked for help from people to take care of her son and the response has been positive. His son has been sent to school to study despite bullies say he is not a normal person.

Upon reaching the school, they met three children who look exactly like him and the mother was surprised to see them. Meet these extraordinary children.

After he was sent to school, he was taken to the city to have a spectacular view of how some places are. He was very surprised and could not believe what he saw. He always stood looking through the glass windows the nice buildings and the beautiful people around. Someone leaving in the bushes and now in the car was a great experience for him.

During the first day of their visit, he was very shy and did not want to interact with them and ran into the bush. It was his mother who went for him. On their second visit, he was more interactive enough though he could not talk. The visitors brought the family rice and other things that they will need to take care of him. The visitors brought a cake to him and it was the first time the family saw and ate cake. Later, they were taken into a hotel to spend the night. The following morning, he was taken into the washroom to washdown. Surprisingly, he became confused when he looked in the mirror and saw his image. He wondered how he could touch that person in the mirror and kept staring at his image. Though with his condition as a disabled person, he has brought laughter onto the face of his mother who never gave up on him. This story of this young boy can be seen that we should always know them for their ability and not their disability 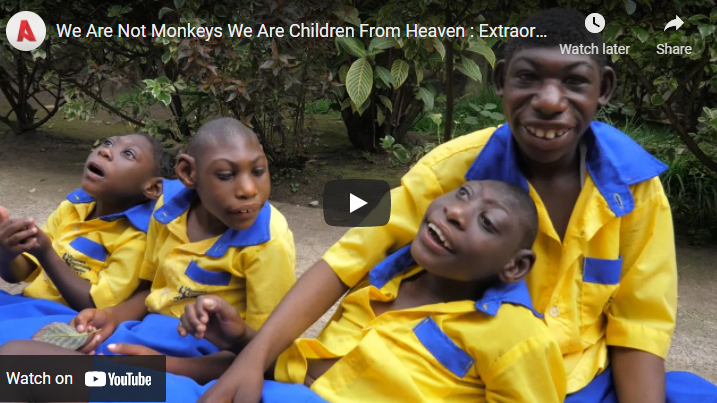