A woman called Auntie Mary has recounted how her husband asked her to grant him his wish by giving him their daughter for money rituals.

Narrating her story on EZRA TV/FM's Apatakese3 Ase on Thursday, the resident of Kojokrom, a suburb of Takoradi, told Sofomaame Naana Hayford that her husband had divorced her after failing to grant him his wish.

According to her, he had worked tidiously with her husband, but her husband had failed to grant her the outcome of the proceeds from their cocoa farm.

"We have cultivated 10 poles of cocoa and 3 poles of palm trees. We have been divorced for the past seventeen years. My husband divorced me because I refused to give out our daughter for money rituals. He has decided not to give me my share of the profits from the cocoa and the palm plantation farm', Auntie told Sofomaame Naana Hayford. 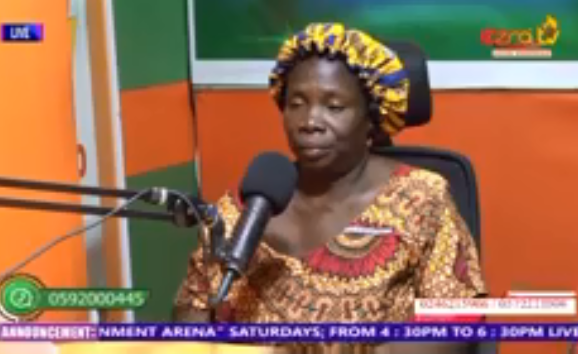 "We were having our dinner and he told me that I should give her Maama Bruwaa(our daughter) so he could use her for money rituals so that their cocoa would yield more fruit," she added.

At the time of the request by his former husband, Auntie Mary disclosed that their daughter was only two years of age.

According to her, his former husband told her to inform her family members that their only daughter was dead when they asked her.

She revealed that after asking her husband what to tell my family members if they inquired about the whereabouts of Maame Bruwaa, he told me to inform them she was dead.

The woman also accused the former husband of trying to kill her after the divorce.

My husband took me to a Fetish priest and made me a cripple and later killed me so he could only enjoy our properties.

WATCH THE ATTACHED VIDEO BELOW