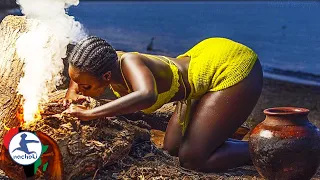 Hello and welcome, kindly follow the blog for interesting articles daily. Thank you.

Marriage is an exceptionally respected tradition in africa due to it's deeply root of appreciation for the notion of family. Many african communities believe marriage is primarily about procreation and providing for children as this is seen as a foundation of today.

But with changing times, marriage has become a form of companionship, friendship and love. And it's no longer the sole purpose of procreation.

Today we look at the top 10 countries in Africa to find a wife in terms of male to female ratio.

This small west African country has a 50.4 female population. Although the country is predominantly Muslim,it is very tolerant of all religions and believes

Gambian women turn to be soft spoken, gentle and tend to avoid conflict trying to settle misunderstandings in a quiet manner. But that does not stop them from being empowered as they are also family oriented and hard working making them ideal wives;citizens and mothers.

This southen african nation jas a female population of 50.5 percent in a maturity Christian population.

The government of angola has designed several programs which promote gender equality and basic human rights. Angolan women have taken more political and socio economic roles as more female entrepreneurs are raising in the country

This women apart from being providers are also known to be spectacular wives,adoring mothers and great providers as well.

Mauritius is an Indian island ocean nation with a 50 percent female population. It is predominantly hindu with some Christian and Muslim presence.

The government has taken to promote the quality of the sexes by repealing discriminatory laws dealing with inheritance and immigration.

This women can marry outside the country which was previously out lawed. Women in Mauritius are believed to make good wives,mothers and also providers.

This landlocked country in East Africa has a 50.7 percent femalw population,predominantly Christian with the presences of Islam.

Ugandan women have substantial economic responsibility throughout Uganda's many traditional societies. They are also quite active in politics,entrepreneurship and make excellent wives,mothers and help a great deal in developing their country.

Out of necessity and pragmatism,up to 80 percent of Rwanda's female survive in genocide population stepped in to fill the leadership vaccum aided by women civil society groups, law makers have introduced some of the most women friendly policies in the world

Women here are known to be family oriented and virtuous wives.

Officially the Kingdom of Eswatini is a landlocked predominantly Christian country in the south of Africa with 51 percent of the country made up of females.

The country recently abolished the marital power law which give the husband ultimate decision power over his wife and thw matrimonial property.

This has been a good move for the women as they can now enjoy economic freedom and empowerment. Eswatini women are known to be hard working, loyal and good mothers.

This west African country has a female population of 51.2 percent and its predominantly Muslim with a 5 percent Christian population.

Senegalese women are know for the love of jewelry and fashion. They make good designers and entrepreneurs. They also play a huge role in the family making good mothers and wives too.

Country located in the south of Africa, it has a female population of 51.6 percent. A majority of the country is Christian.

Botswana indeed one of Africa's politically stable countries and has seen a recent victory in the fight for women's right and gender equality.

The women are highly educated, hard working and entrepreneurial. They are also believed to be great wives, mothers and prividers.

Guinea is a country in west Africa bordered on the west by the Atlantic Ocean. It has the female population of about 51.7 percent.

The most practiced religion is Islam with a few Christians. Pertaining to women's right empowerment and representation, the country has seen huge improvements over the years with more girls going to school and wining representation in work and politics.

Located in the south of Africa dominated by Christians with a small Muslim community. Women represent a higher population of 52. 3 percent.

The country has made significant inroads in promoting gender equality through measures policies that ensure equal and equitability access and ownership of resource between men and women.

Women out here are known to be very strong driven and family oriented. They thrive in business.

Do yoy agree with this list? Is there a country we left out that you think must be included? Leave your your comments below.

Content created and supplied by: Sports120A (via Opera News )