I married him only to realize he could only last 1 minute in bed, what do I do? (Fiction)

I had always been a church girl and didn't like the idea of getting into a relationship at a very early stage in my life. Life had always been fun and I really enjoyed the single life. In those days, I clearly remember many people in my neighborhood using me as an example to their kids, how awesome it was. I was so unique such that everyone would like to have me as their daughter.

Many people would think that maybe, I wasn't so physically attractive and that is why I was moving on the path of singleness. No, I am very beautiful and well endowed with heavy goods such that whenever I go out, I get at least one man approaching me and pouring out his heart to me. I was just not in the mood to get attached to a man at that point in my life. Whenever they approached, my response was that I was not ready to be in a relationship but could be friends with them. Some agreed, others moved on. Well, such is life.

As single as I was, age was catching up and I had to finally get attached to someone who would be my husband in the near future. After all, I got to realize that the single life is boring when age starts catching up with you. I was 26 years old by then and was no more holding on to the title of being a single lady. I had to make my parents and family proud by finally getting attached to the love of my life.

This is when my current husband came in. He approached me on one sunny Friday afternoon during my break time at work. He just couldn't resist my presence as he stared at me for over a minute. Fast forward he approached me and asked whether he could sit beside me in the canteen. "Why not?" I replied, "have a seat".

This is where our conversation started. He was very fun to be with and cracked many jokes such that I didn't even want my break time to end. Before leaving the canteen he asked if he could get my number and I willingly gave it to him. Well, he was nice and cool so I never bothered giving it out.

Time passed and we became great friends until he asked her to date me. I accepted his proposal because I knew we were the perfect pair. He was very nice, he took me out on dates, bought me things, went to church with me and did many other interesting things with me but there was one thing he was yet to do. He had always asked me to sleep with him before we married but as a devout Christian, I always rejected that offer. I didn't want to commit any sin and was hoping to sleep with him only after marriage. I think he didn't like that idea because of he felt uncomfortable thinking I didn't love him. I made him understand that I loved him but I just didn't want to go against the Bible which he understood.

Two years after dating, he finally decided to ask me to marry him. That was one of the happiest moments in my life. I accepted his proposal and we did everything we could to make this wedding possible. We just married last two months and sadly, I have encountered a very big problem with him. We sleep together alright but he only lasts one minute in bed. 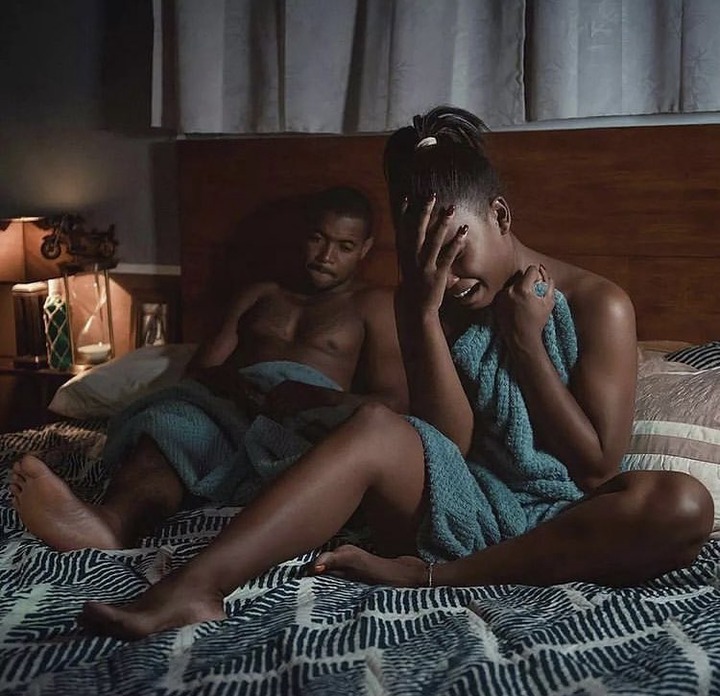 He doesn't make me happy. He gets me in the mood only to release it in about a minute. I just don't know what to do. I am pretty sure I would have known what to do if I had tasted him before marriage but I didn't want to do that.

I try telling him to get himself checked up but he doesn't listen to me. I just heard that he had been using enhancement drugs at an early age and this is the reason why his energy had drastically reduced.