Curses: girl dares a boy she allegedly dated to change her name if he progresses in life 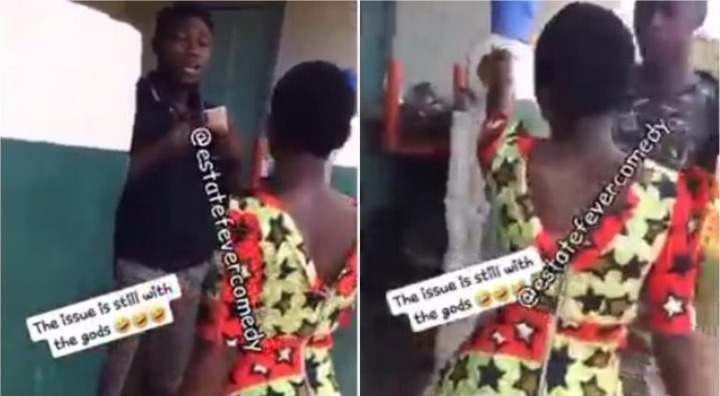 A video circulating on social media shows a young lady raining curses on a young guy. People are speculating she is a victim of ‘hit and tun’ and a broken heart. In the video, she was so angry that she was her words there was shortness of breath as she struggled to put her message across.

She said that the guy should change her name if he is able to marry in the future or he progresses in life. According to her, she will make sure she does this so that the guy will one day remember her – Maame Efua.

With the marriage daring, it’s irrefutable that it is an issue of relationship, break up and a broken heart. In some way, the guy looked a little disturbed. However, he questioned what the young lady could do to him and that brought about the daring and the curses.

The issue has triggered much concern on social media.

People believe that the guy just ‘hit and run’ while the young lady took the entire one-night stand seriously. Some also believe he has dumped her after sexually exploiting her for another girl.

The African has a belief that when a man offends a woman he has known sexually, any provocative speech the woman would utter will affect the man gruesomely. Having that in mind, a lot of ladies resort to pouring curses on men who take advantage of them to salve their pain. Instances have shown where elderly men who had toiled fruitlessly all their lives had to go back to the women in their youthful past to plea for sins they committed. And yes, after that, life gave them friendly looks. Is it a mere coincidence?

Thus, do these curses work or they are mere superstitious beliefs meant to restore some relief to the afflicted.