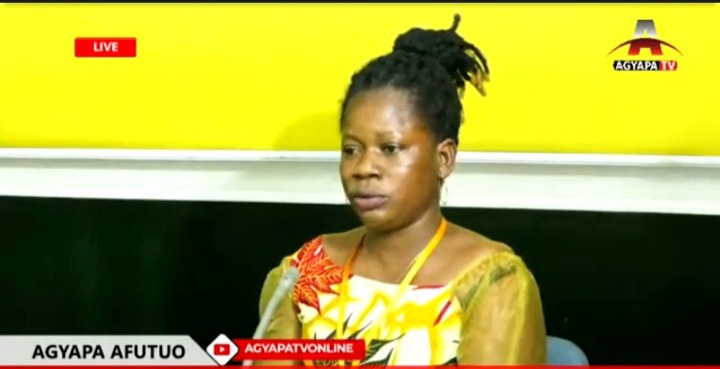 A single mother of three called Esther Amoako who is a resident of Koforidua, tells what transpired after her daughter did a blood covenant with her boyfriend some years ago. According to the mother she was living with her late husband in Kumasi and were blessed with three children. Unfortunately her husband fell ill for a while before his death, leaving her alone with their three children.

Esther said she went with the children to Koforidua to continue her work as a seamstress to take care of them. One day, she learned that her daughter known as Cynthia had started dating their neighbour called Amoah who already had a girlfriend. She advised her daughter to give up her relationship with their neighbour and focus on her education but she never listened to her.

During a vacation, her daughter went to Accra with Amoah without her knowledge, she was a bit surprised but Cynthia convinced her that she is working to make ends meet. Unfortunately, she came home when the school reopened but was left empty-handed. She asked her about the savings but his daughter revealed to her that her boyfriend took all the money she got from her job.

Although the mother was not in support of her relationship with Amoah but the young girl continued dating him. One evening, Amoah came to their house looking upset because his daughter had seized his cell phone. He started throwing stones at them when Cynthia refused to give the phone to him, until her sister was injured and started bleeding.

She decided to seek treatment for her sister but the young man prevented them from going to the hospital that night with the fear of getting arrested. Esther stated that she filed a complain at the police station and her daughter's boyfriend was arrested the next morning. She thought this whole incident will prevent Cynthia from dating their neighbour.

But she continued to date the young man and secretly made a blood covenant with him and promised each other to stay together until death after Amoah was bailed out. Esther again said her daughter got pregnant with the young man but the other girlfriend scolded and cursed her for snatching her boyfriend. The mother added that she tried to take care of her during her pregnancy period but it has more than a year but her daughter has not delivered.

Her worries are how the young girl is going through pains so she consulted a pastor to pray for her daughter to deliver safely but the man of God revealed to her that unless they break the blood covenant Cynthia made and also revoke the curse before she can give birth. The mother is now pleading with Amoah to help them by agreeing to break the blood covenant with her daughter and also advised his girlfriend to reverse the curse.