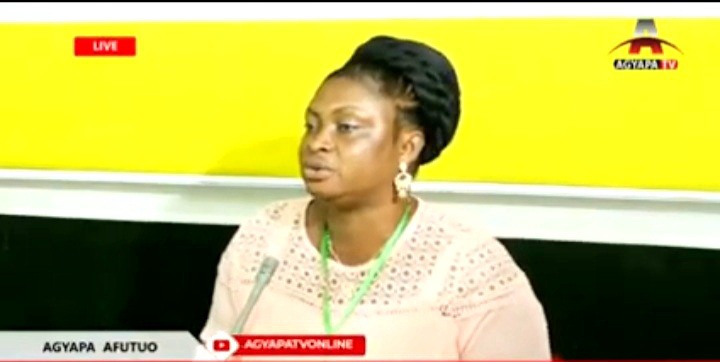 Gifty Pomaa in an interview opened up on why a married woman agreed with her to be in a relationship with her husband and produce kids for him. According to the lady, she travelled to Nyanyano in Kasoa years ago and was selling bread to support herself. One fateful day, she came into contact with Kwabena Tawiah who proposed to her after they had a nice chat.

The man even revealed to her that he has staying with his wife for 25 but they unable to birth. He also pleaded with her to be in a relationship and also produced for him. Gifty said she declined his proposal because of his marital status but the man went to convince his wife to allow him to date her so that he can have a child. The three of them had a meeting one evening and Tawia's wife agreed with her to go ahead and date her husband so that they too can have a child.

The lady added that she accepted the man's proposal and got into a relationship with him and also went to stay in the same house with the man and his wife. Fortunately, she conceive for her boyfriend three months, both of them were happy about this pregnancy but her rival became angry and caused her to die when she found out that she has conceive for her husband. She was surprised about her rival's behaviour so she informed Tawiah about what Akua her rival did.

Their family members met and advised the Akua to revoke the curse and also settled any misunderstanding between them. But Akua continue to maltreat her on so many occasions. Gifty claims she became fed up of what was happening to her so she has run away and travelled back to her hometown to give birth. A year later, Tawiah pleaded with her to forgive his wife and also promised to rent a house for her.

She listened to him and returned to Nyanyano but life became worse than ever. Her boyfriend didn't pay much attention to her or take good care of her and the child. She too was working to sustain herself at that period. It got to a point where the man took full custody of the son when he was 4 years old, but the couple didn't take proper care of the child. Tawia brought her son back to her two years ago and has not sent her any money to take care of the child. Gifty is demanding the money she spent in catering for the child throughout the two years and also wants him to perform his responsibilities.