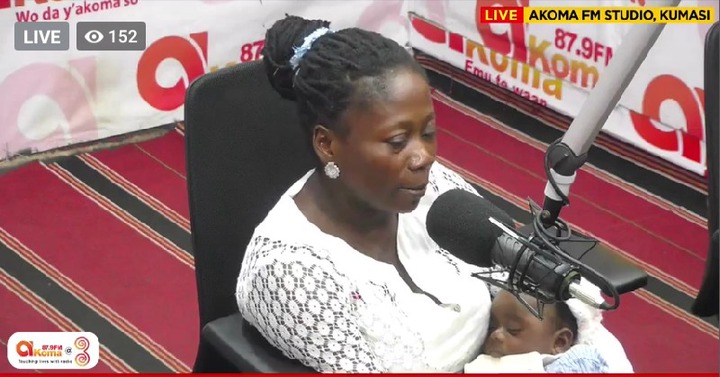 A mother of four named Patricia Baidoo traveled to Accra to work 9 years ago. She came into contact with Emmanuel Banfo. The man proposed to her and she too was single at that time, so she accepted to be in a relationship with him.The two of them work hard to cater to support each other but after they gave birth to 3 children, life became difficult for them.

Feeding their three kids was a big problem for them so they went to stay at Kasoa. The lady added that still, her boyfriend was not taking care of her properly. She then went for a loan and started trading, years later, her boyfriend advised her to travelled back to their homework and stay with her mother-in-law at Agona Nyakrom. At first, Emmanuel came to visit them regularly, she again conceived for the fourth time.

This time around the man didn't give her money or visit her again. It is her mother-in-law who took care of her till she gave birth. Patricia said she got money from her work and traveled back to Accra but the man didn't allow her to stay with him and they got separated due to this issue. She has to rent her room and also work to take care of the children. All this while, her boyfriend never pay attention to any of the children, few months later, Emmanuel came for one of their kids leaving the other three with her.

Patricia said now their daughter is in Senior high School still Emmanuel doesn't want to support her in providing the basic things their daughter needs. She called her ex-boyfriend and asked him why he has decided not to cater for the children, Emmanuel revealed to her that his money is not enough to take care of any child.

According to Emmanuel, he has tried everything he could to take care of them, he also said they shared the kids among themselves when they got separated but the woman used to summon him at different places claiming that he doesn't take care of the children which is never true. The man added that he wants to gets custody of all his four children and take care of them to prevent any further problems.