By Replay (self media writer) | 1 month ago

Nima is a cool place to stay. However, many have the belief that it's rowdy and living there creates tension and fear in the inhabitants of the town. A wedding celebration turned into tears after a resident of Nima-Freetown got hit by a stray bullet shot by friends and family of the bride and groom. The victim, Eunice Yeboah(27 years old), was on her way home with her younger brother, Wisdom when the incident happened.

According to Wisdom, the bullet hit her through her hip and penetrated her stomach. Workers at Mammobi Polyclinic couldn't offer enough help so Wisdom decided to rush Eunice to Ridge Hospital of which they were turned away. Finally, Eunice was taken to the Police Hospital for further treatment. The doctor confirmed that her womb and intestines were in a bad state after the bullet was removed from her stomach and that further treatment needed to be conducted.

After the surgery, the doctor informed Eunice's mother, Janet, that Eunice had to be put in a machine since she was unconscious which was going to cost two thousand (2000) cedis. Janet had only one hundred thousand and three hundred(1300) cedis on her. She pleaded with the doctor to accept the initial payment and assured the doctor to add the rest later.

Unfortunately, Eunice passed on Tuesday dawn. Janet added that investigations are being conducted. Godson, Eunice's elder brother, stated that the police had done nothing about several complaints made about the indiscriminate use of guns in Nima. 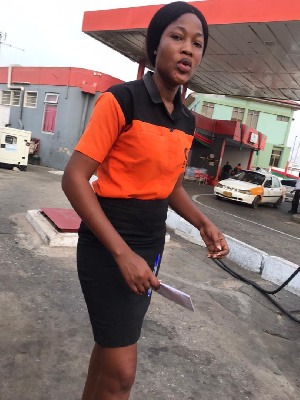 Content created and supplied by: Replay (via Opera News )