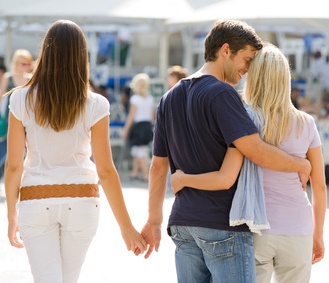 Watching a girl flirt with your boyfriend can be emotionally challenging and unpleasant. She might laugh extra loudly at his jokes, touch him in an overly affectionate way, or flirt in general - in public. Figuring out what to do in this situation is hard because you don’t want to falsely accuse her or your boyfriend of infidelity, but you’re also hurt by their actions. You can know whether or not this girl is attempting to take your boyfriend from you, that is what this article is for.

See if she wants to be alone with him. If the girl wants to be alone with your boyfriend, it demonstrates that her flirting is not just for social power and self-esteem. Make note of when they spend time alone together. Look out for the following things: She invites him for outings where it will be just the two of them, such as the movies or lunch at a coffee shop. She asks him to do her favors (such as change a lightbulb) where he would go somewhere alone with her. She asks him to go on walks with her. When he says he’s going to do something, such as get a glass of water in the next room, she invites herself and goes with him.

See if she texts or calls him frequently. Is your boyfriend secretive about his texts with her? Does she call or text him more than you would with a platonic friend? Although this communication does not mean that she wants to be more than friends, it can be a red flag. If you see your boyfriend texting someone frequently, ask him who it is. If he is dodgy or defensive about it, it might be her. Going through your boyfriend’s texts might be an invasion of privacy. If he seems as though he is lying, have a conversation with him about trust.

Acknowledge your jealousy. Naming your jealousy is the first step to overcoming it. Let yourself feel your jealous emotions for a little bit. Jealousy in small doses can be a positive thing for a relationship because it reminds you that you want to be in a monogamous relationship. However, do not let your jealousy consume you. Name it as jealousy and try to mentally separate it from the rest of your life.

Thanks for reading through.