African weddings are unique. They are usually jolly, filled with music, family banter, food and so much fun. Another thing that makes African weddings special are the wedding attire. Africans are naturally very fashionable people and would take on occasions or gatherings such as weddings, naming ceremonies, parties or church services to display their beauty wears. 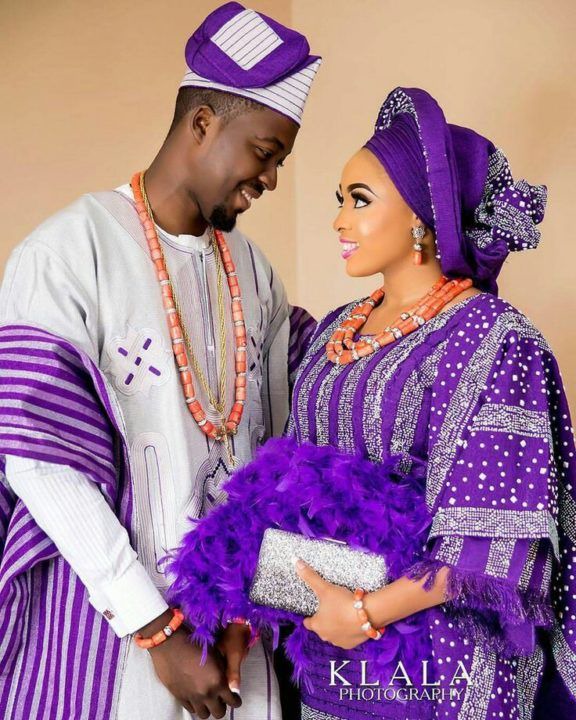 The Yoruba people are a highly cultural people predominantly found in Western Nigeria. The bride wears a gele( head scarf), buba( blouse),and iro ( a wrapper tied around her waist) while the groom wears an Agbada ( a multi- layered kaftan) and Fila ( Yoruba traditional cap). The bride and groom usually wear same material and colours already decided on before the wedding. 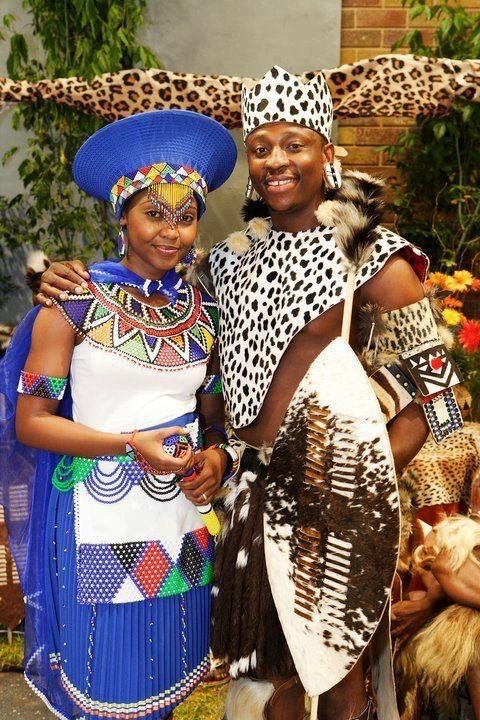 The Zulu people are majorly in the Kwazulu-Natal province in South Africa and among one of the most popular African tribes. Like most African weddings, An Umabo( Zulu tradition wedding) is filled with fun, music, dancing and lots more.

The bride wears Isidwaba- leather skirts, Isicwaya to cover her chest. She also has on what is called the Inkehli which covers her head. The groom wears, Ibheshu and Isinene worn on the lower parts. The Isembatho over his shoulders and Iklolode to cover his head. 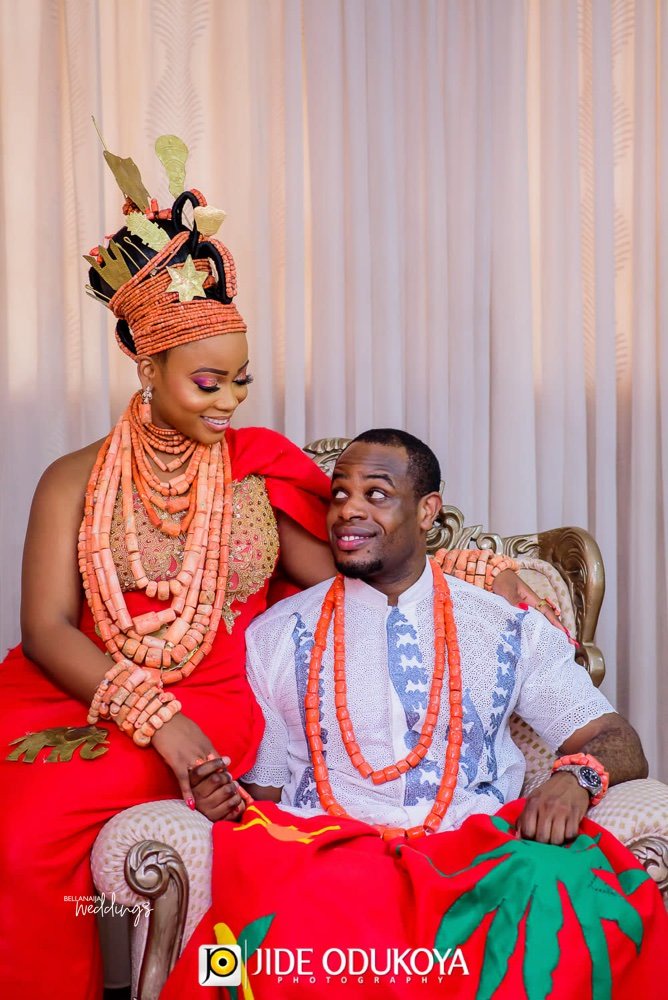 The Edo tribe is one of which is centuries old and depicts a lot of power and royalty. The Edo people are from the Southern part of Nigeria which has the ancient city of Benin as its capital. A typical Edo wedding is one which is characterized by coral beads on the fabric in which the brides draped in from the head down.

The ensemble comes with beaded hairdo, a bracelet around her wrist called " Ivie-ebo," earrings called "Emi-ehorivie," waist beads and a cape called " Ewu-ivie," made entirely of beads. In an attire fit for a queen, the bride must wear her "Okuku," an intricately beaded crown.

For the crown to fit on her head, her hair is traditionally put up in a high up-do called "Eto-Okuku." For the groom, he simple compliments his bride by wearing a white native, a beaded cap, and coral neck beads. Taking it up a notch he could pair his attire with a walking stick that highlights his status. 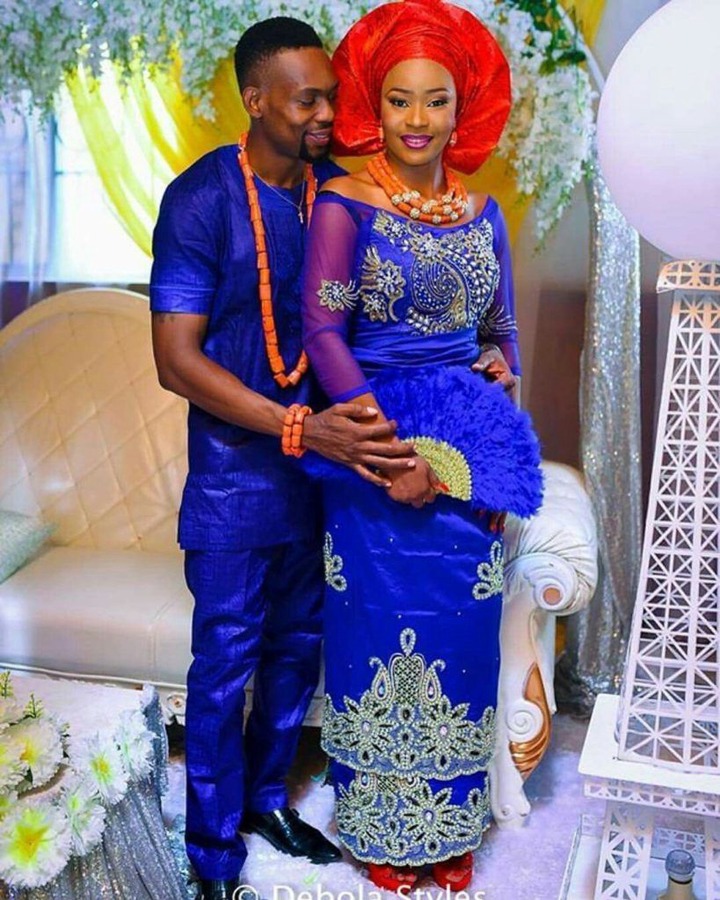 The Igbo tribe is located in South-eastern Nigeria. The bride wears two ' George wrappers', a blouse and headgear all locally made with a traditional Ibo Kaftan. 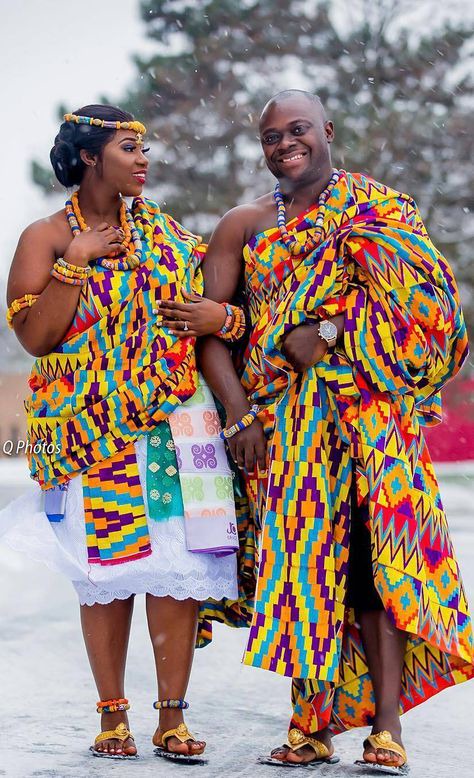 The Ashanti tribe is located in south-central of Ghana, being the largest ethnic group of the Akan. Both the bride and groom have a Kente attire adorned with expensive beads and other pieces of jewelry. 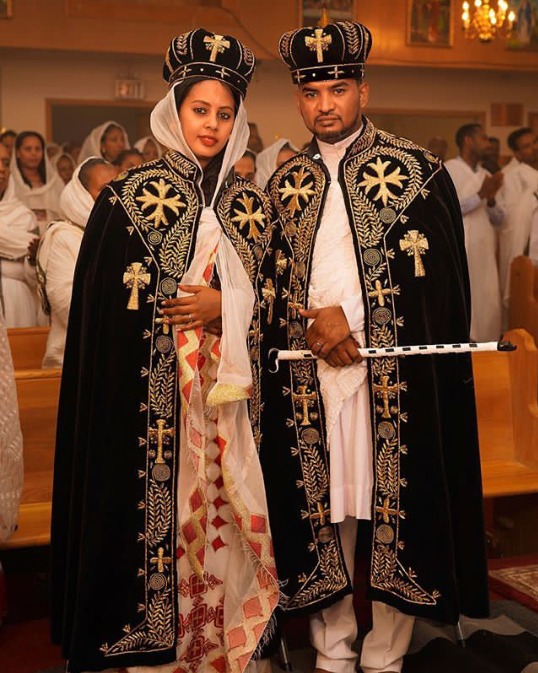 The Habesha are located in the highlands of Eritrea and Ethiopia. The bride wears a beautiful cornrow design called the Albaso hairstyles. The groom usually has an all white Kaftan and they both have adorned capes called the Kaba.

Traditional wedding is without a doubt a thing of joy for African couples: though it involves a lot of preparation from both families to make the union a memorable one.

Regardless the fact that civilization brought about the white wedding to African, traditional marriage rites are still practiced and traditional attires that is adorned on the day happens to be one of the most exciting part of of the union between couples.