Driver in trouble over GH¢30,000 worth of glass slides

On the Kasoa Fastman road, a neighbourhood road that joins the Kasoa Liberia Camp and Kasoa to Cape Coast highway is where a sedan driver mistakenly crossed a loaded DAF truck coming from a warehouse. The loaded truck belonging to JK and Sons Limited, a glass slide company, was delivering the goods to the owner of the glass after payment has gone through. 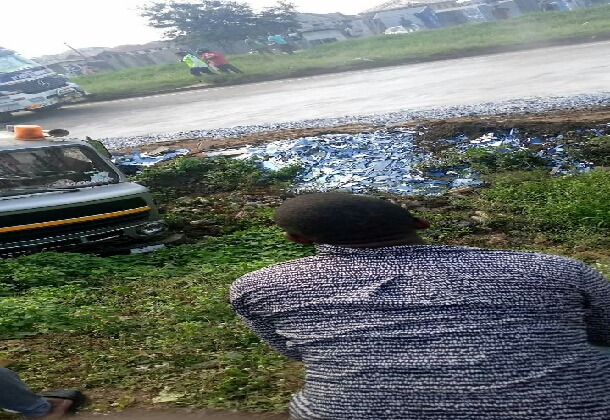 The sedan, a Hyundai Sonata, which was coming from the Cape Coast road, branched onto the Fastman road and never cared to slow down, according to an eyewitness. From the junction where the Fastman road meets the highway, was where the Hyundai driver almost knocked a pedestrian down and that still didn't stop him from over speeding, John Kudacour, an eyewitnessed explained to Kasoa Liberia Camp MTTU officers.

The Hyundai driver at 68km/h on the 50km/h maximum road, crossed the loaded glass slide truck at the Afiegya bus stop of the Fastman road and forced the truck to veer off the road in other to avoid a head to head collision. The truck driver only did what would have saved him from crashing the sedan, and that caused the accident John Kudacour stated.

There were no casualties on spot and all victims were unhurt as both drivers had their seat belts on. Although the accident hasn't been established to be the fault of the Hyundai Sonata sedan driver, but the driver had taken full cost of the items in a pledge he made to the police, JK company and the owner of the glass slides.

The driver of the sedan, Alhaji Sharifi, with permission from Kasoa MTTU police officers, fled the scene of the accident on the account that, he was needed at a hospital for an emergency. He left behind his identity cards, and an undisclosed amount of money plus his license to the police officers in a pledge to come back and solve the issue when he is done with his emergency duties.

It is rumoured the man who allegedly caused the accident, will pay all the cost of the damaged glass slides which is around thirty thousand cedis, the owner of the glass slides, Madam Abrefi Martha confirmed from the assurance the sonata driver, Alhaji Sharif gave her. Police are on the scene preparing to tow the truck away to ease traffic.