It's barely three days since the Inspector-General of Police, Dr. George Akuffo Dampare took office but the actions he's taken so far are very much impressive. Many had commended him for being proactive in the discharge of his duties.

A new dawn of policing beckons under his leadership and this is already taking shape. Today, he joined the Armed Robbery Taskforce to commend them for the work done over the years and also to direct them with his vision of professionalism in the Ghana Police Service. 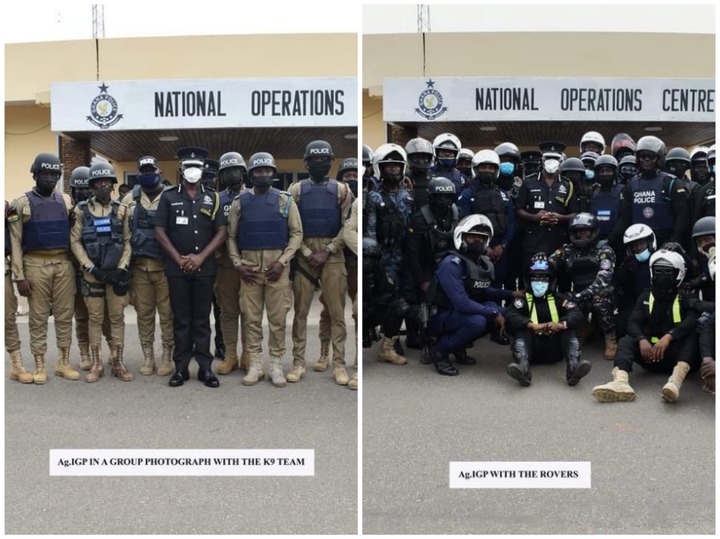 He expressed confidence in the Armed Robbery Taskforce stressing that they should remain professional in discharging their duties. Dr. Akuffo Dampare emphasized that the unit must maintain the best of crime combating measures to curb armed robbery in the country.

This he emphasized is the main goal of the taskforce which was established in June this year to respond to the rising levels of robbery attacks in the cities and other parts of the country. These works of encouragement could set the new Taskforce within the police service to succeed in their work.

Over the past years robbery and petty theft had been on the ascendency, with some cases leading to deaths of victims and even police officers. The public where thrown into apprehension and raised grave concerns about internal security of the country.

Much of these concerns triggered the installation of CCTV cameras at major or flash spots in regional capitals so the police could have video evidence of these crimes, so they could nail the suspects in time.

Other measures such as town patrols are expected to improve in due time so the streets could be safe.

It is a gradual phenomenon but the hopes that many Ghanaians have in the new IGP is promising that some mega transfromation will take place in the Ghana Police Service.

After his visit to the Armed Robbery Taskforce, the various units will hit the street in their tactical assignment to protect people from robbery attacks. What people expect is to see the police foil these attacks instead of conducting investigations after these criminals had bolted.

Currently, areas where robberies had been on the rise include Takoradi, Kumasi, Accra, Upper East and Savanna Regions. Though it's not predictable when the next robbery attacks will take place, the police are capable to map out crime prone areas bases on incidence and intelligence they gather from residents.

Ghana currently has a population of 30.8 million people, according to GSS.