Reasons Why Crime Florishes In Every Country.

By Healthmatics (self meida writer) | 21 days 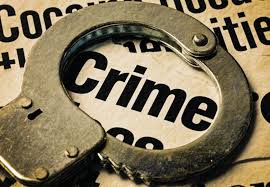 SINCE 1960 serious crimes in the United States have increased 88 percent, while the population has increased only 10 percent. Now one out of every five American families suffers from a criminal act every year. But crime is not strictly an American ailment.

It is on the increase world wide.In the Philippine Republic, for example, the crime rate during the year of 1965 jumped an astounding 51 percent.

Regarding crime in England, the book Crime in Our Time, by Josephine Bell, observes: “The increase in the volume of crime in England since the end of the Second World War is both frightening and inexplicable.”With regard to the Soviet Union, Newsweek magazine of December 23, 1968, remarked: “The Soviet Government, which normally tries to bury its shortcomings under mountains of statistics, takes the opposite tack with crime; it rarely publishes any crime statistics at all.

But all signs are that crime is on the increase in Russia just as it is in all industrialized countries.”The rate of crime is actually much higher than official statistics reveal, because many crimes are not reported to the police. It has been found that in many big-city slum areas crime may be as much as ten times the official police figures.

Time magazine of February 14, 1969, reported: “Only about one-half of the rapes, robberies, aggravated assaults, burglaries and major larcenies that are committed in the U.S. each year manage to get onto the police blotter.”It would seem, therefore, that crime is flourishing far more than is generally thought. What is the reason? Is it really due to lack of education, poor housing and poverty? Or are there more important reasons?Too LenientIt is the view of many persons that the courts have been too lenient with lawbreakers, and that this has encouraged lawlessness.

The U.S. attorney in Chicago, Edward V. Hanrahan, said in 1968: “Many sentences are way too lenient. They don’t teach the defendant a lesson or pose a warning to the rest of the community.”Voicing a similar opinion, the police chief of Cleveland remarked: “Recent court decisions encourage crime and are very discouraging for police.” And Judge Tim C. Murphy of Washington, D.C., said: “There is an attitude that these cases must be moved through.

Charges are reduced day after day.”Speaking with regard to British crimes, Lord Shawcross, who was Britain’s Attorney General from 1945 to 1951, noted: “Crime is booming. We have been faced since the war with a massive increase year by year in serious crimes .

The truth is, I believe, that the law has become hopelessly unrealistic in its attitude toward the prevention and detection of crime . . . . Our laws are too heavily loaded in favor of criminals.”UnpunishedThe fact that most crimes are unsolved and unpunished is another reason why crime flourishes. It has been estimated that less than 21 percent of the reported crimes are solved by the arrest of suspects and only 6 percent end up with convictions.

That is only about one conviction for every seventeen crimes committed!In a report made in 1967 by the President’s Commission on Law Enforcement and Administration of Justice the conclusion was made that “if a suspect is neither known to the victim nor arrested at the scene of the crime, the chances of ever arresting him are slim.”

Regarding this same situation in Great Britain, Lord Shawcross observed: “Why is it that crime pays? It pays because most criminals are not caught.”Unless a person has a very high standard of morals, is he not likely to commit an unlawful act if he feels fairly certain that he will not be caught?

For example, when reporting his income taxes, is he not likely to withhold some of his income if he thinks he can get away with it?In the case of more serious offenses, too, a criminal will feel bolder and will strike more frequently if he thinks there is a good chance he will not get caught.

The longer he is able to engage in criminal acts without detection the more set he becomes in continuing his unlawful activities. Others seeing his success are encouraged to commit crimes of their own.

All this underscores a basic truth expressed long ago in the Bible. “Because sentence against a bad work has not been executed speedily, that is why the heart of the sons of men has become fully set in them to do bad.” (Eccl. 8:11) Due to inherited sin and imperfection humans are inclined toward bad from the day of their birth.

They need restrictive laws and good moral standards to guide them to do what is right.Public SupportAlthough the public are the victims of crime, they help to finance it by buying illegal services and products. Criminals are willing to supply these at a price. For example, could prostitution exist if it were not supported by the public? Would burglary be such a problem if thieves could not find a market with the public for stolen goods?

How could the vicious narcotics trade survive if there were no market for illegal narcotics?Also, is it not the public who support the gambling empire of organized crime? The fact is that the proceeds from gambling corrupt many public officials, finance a host of criminal activities, and even make it possible for gangsters to take over legitimate businesses. The book The Challenge of Crime in a Free Society, which is the report by the President’s Commission on Law Enforcement and Administration of Justice, states: “Law enforcement officials agree almost unanimously that gambling is the greatest source of revenue for organized crime.”Further showing how gambling by the public supports criminals, Harper’s Magazine of April 1964 stated: “Our system as a whole is at fault and we must all share responsibility​—down to the individual citizen who contributes his nickels, dimes, and dollars to a policy game or bookmaker.

He thus supports the army of syndicate soldiers and ‘hit’ men and feeds the coffers of this hidden government called The Syndicate, Cosa Nostra, The Mob, or whatever name you choose.”A family may think it is not personally affected by organized crime, but it is. Racketeer-owned businesses may endanger the health of the family by illegally selling tainted foods and harmful drugs. Also, the family may have to pay higher taxes for a larger police force to fight local crime, or because corrupt public officials are wasting tax money on public works contracts given to gangster-owned contracting companies.

What Is LackingWhy is it that the public perpetuates the climate that breeds crime and corruption? A fundamental reason is that so many persons lack respect for the high moral standards of God’s Word the Bible. Notwithstanding their profession of being Christian, they prove by their actions to be influenced by materialistic atheism.

They put personal, selfish interests ahead of obedience to divine laws.One of the persons on the President’s Commission on Law Enforcement stated: “Thorough as the Commission’s studies have been and comprehensive as its valuable recommendations are its report seems deficient to me in that it neglects to recognize godlessness as a basic cause of crime.”Also the book Crime in Our Time remarks with regard to England: “A lowering of moral perception and standard is a definite feature of life in this country today . .

But the number of fully believing practising Christians must now be very small, relative to the whole population.”When the moral standards of the Bible are thrown aside, what is left to restrain man’s inherent inclination toward badness? With no restraints, with people doing what is right in their own eyes, is it any wonder that crime is skyrocketing?

Furthermore, we live in the generation in which, as the Bible reports, Satan the Devil, knowing his time is short, vents great anger. “On this account. . . woe for the earth,” the Bible says. (Rev. 12:7-12) Is it any wonder that there are riots and spreading lawlessness? Is it any wonder that many city streets are no longer safe after dark?

Crime will cease to flourish and even to exist only when the Devil is put out of operation by God and when all persons live by the moral standards and divine laws of the Bible. Such a worldwide transformation is possible only by the hand of God. That it will be realized is assured us by God’s own promise: “For evildoers themselves will be cut off . . .

And just a little while longer, and the wicked one will be no more; and you will certainly give attention to his place, and he will not be. But the meek ones themselves will possess the earth, and they will indeed find their exquisite delight in the abundance of peace.”​—Ps. 37:9-11.