The Children's Ministry of Obuasi Kunka Central Assembly of the Church of Pentecost organized a Holy Ghost service where a young man was delivered from the chains of the devil. Can Elvis Chi is from Cameroon and found himself in Ghana after he escaped from a civil war in his country. The 26 years old man narrated that he lost his 4 sisters out of the civil war and resorted to magical powers to avenge the death of his sisters and also to protect his life. 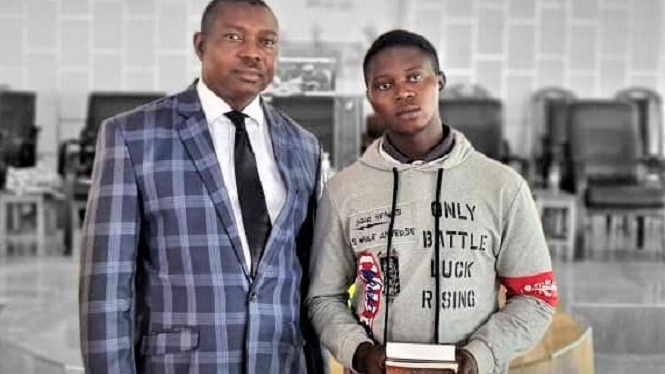 He visited a fetish priest in the Enugu state in Nigeria where he was buried in a coffin for two weeks. Afterwards, he was given two rings. One ring was put on his finger and the other he was made to swallow after it was put in a concoction made from a dead body. Afterwards, he became invisible as he could appear and disappear. Also, he became bulletproof and his gang even nicknamed him "The spirit".

He said that during the civil war he alone was able to kill 207 soldiers and burnt about 30 churches. However, the war became intense and about 57 members of his gang were killed. But due to the powers, he was possessing, he was able to escape to Nigeria. He travelled from Nigeria through to Benin, Togo and then to Ghana. The evil spirit had assigned him to kill 1000 soldiers, but since he was able to kill only 207, he was being tormented by the evil spirit.

He said the evil spirit tormented him so much that he tried to commit suicide several times, but whenever he tried to stab himself, the knife would turn to wood. He visited several fetish priests for help, they took all his money but his problems prevailed. He said an evangelist once gave him a small new testament Bible.

One day he picked the Bible and ended up in Obuasi Kunka central assembly of Pentecost where the children were having a prayer session. He joined and the Presiding Elder prayed for him. He vomited the ring during prayers and was delivered. Elvis has now been delivered from the evil spirit that was tormenting him and now fellowships with the Obuasi PIWC.

Guys, please don't do these things during intimacy with your woman

How to prepare the best Christmas ham