By Markayy (self meida writer) | 12 days 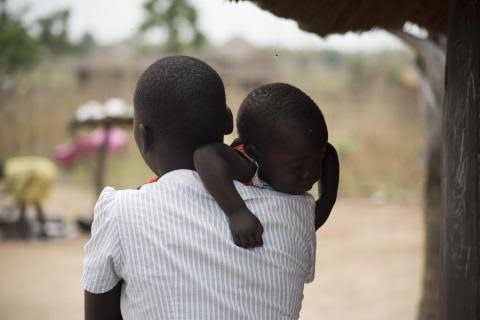 A 24-year-old single mother of 3 children has been jailed for stealing a neighbor’s Ghc5. She could not hold back her tears as she narrated how she had no means to feed her hungry children on that fateful day. Akua Akyaa recounted her ordeal to Crime Check TV GH at the Kumasi Central prison where she was spending her jail term without having any idea about how her three young kids were faring in her absence.

According to her, she was working at a certain chop bar where she was being paid Ghc5 until the owner of the business asked her to stay home temporarily because her daughter who had returned from school would be helping her for the time being.

Life then became unbearable for Akyaa. All the children she had with two different men have abandoned her.

She was compelled to pick a neighbor’s Ghc5 to buy food for her hungry children. She did this without permission, and it brought about her arrest.

The argument escalated into a fight during which she injured the neighbor with a blade she laid her hands on. She did this to defend herself against the neighbor whom she said had overpowered her.

Akya was arrested by the police following a complaint by the neighbor and was subsequently put before a court of law.

According to Akyaa, she was slapped with a fine of Ghc1,200 and further ordered to pay Ghc1,000 compensation to her neighbor. Her. failure and inability to raise the Ghc2,200 total cost landed her to two months imprisonment.

Fortunately, a kindhearted individual has paid the said cost through Crime Check TV GH, leading to her eventual liberation.