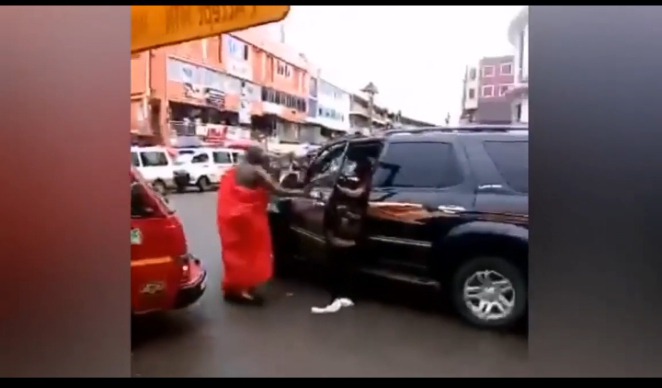 Drama on street as husband attacks man for Allegedly sleeping with the wife. This was said to have happened in Kumasi somewhere in the afternoon which attracted lot crowd to step to the scene

The instance was noted in a video going viral which identifies the agitated husband attacking the alleged man in his car with Cutlass.

Critical examination of the video showed that, the husband after discovering the man has been sleeping with the wife couldn't control the anger. It is also believed from the video that, the man on the not discovered that at a funeral ceremony since he was in our casual wear for all funeral ceremony (Red Fabric) .

In The video, the alleged man got pounced on and attacked by the husband with Cutlass while driving in his high Lander around Kumasi street. The man sensing danger got down the car to run for the life

According to the husband, the man has Allegedly slept with the wife several times he has never got to know of and for that reason, called for the attack.

This is not the first to happen, recently on Oyerpa fm a program hosted by Ante Naah, woman who got married for just a year secretly slept with another man other than the husband and the woman speaking charged the husband on always worrying her peace.

So the question is Why?