By Newsafri24 (self media writer) | 1 month ago

The Late Mr. Francis Dawson wife Mrs. Dawson who got married recently lost her husband. the stay at kaemebre which is located at the central region of Ghana. Mrs. Dowson made a complain to the police to investigate about the death of her late husband Mr. Dowson.

According to Mrs. Dawson, she has not heard from the police since her husband died. so she took it to her self that it's time to let the world know about the terrible story behind the death of her husband. Mrs. Dawson went to police station to beg the senior police officer to investigate her husband death.

" we were on our bed sleeping at night and some young men broke into our room wearing police uniform, we woke up out of fear and the requested to take husband to the police station for interrogation. we were all in a complete shock cause he did not commit any sin, so I asked them which station are they taking him to but they insisted without telling me, they started to beat him right in front of me and took him away after that" Mrs. Dawson said.

Per the information gathered the widow went to all the police stations in the area but none has him in their custody, later on it was announced that some young man been killed so she rushed there to check and she found out that it was her husband who is laying down down there and completely burnt.

How did you know is your husband? The media men asked the widow. " he is my husband and i know him well and i saw the shirt he was wearing before he was murderd " She said.

VIEWER DISCRETION !!!!!! IMAGES FROM THE CRIME SCENE AND CAPTION SHARED BY JOURNALISTS. 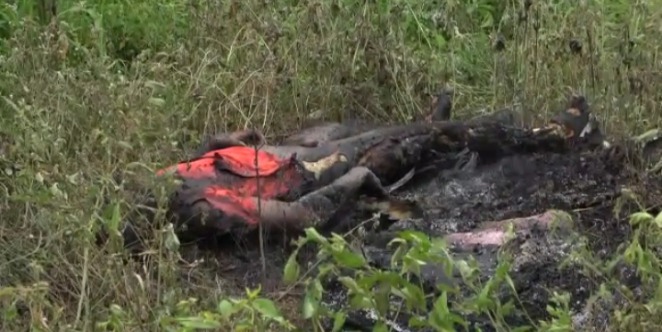