By AfricaWish.com (self meida writer) | 15 days 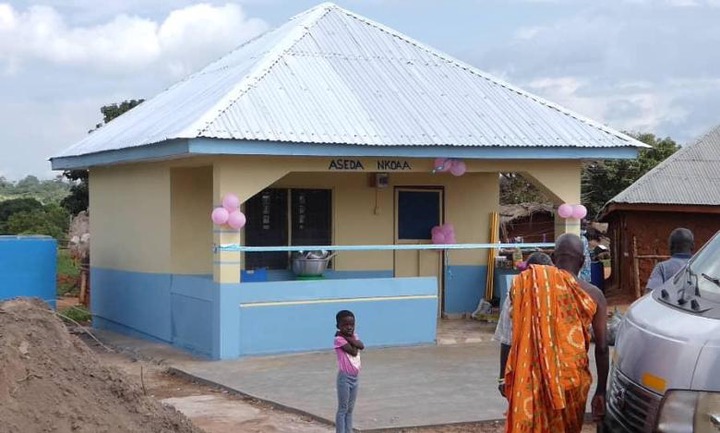 The kind gesture of a young teacher to bring to the attention of Kessben Foundation the deplorable living condition of a poor invalid woman has in the end brought smiles and tremendous joy to the people of Amoaman Nsuta in the Sekyere Central District of the Ashanti Region.

The poor living condition of Madam Ama Pim, believed to be in her late sixties was first brought to the attention of the Kessben Foundation early this year by a teacher of the Methodist Primary School in the community.

The rundown rugs-tacked shack of Madam Pim before being resettled.

Mr. Dwomoh Sarpong who responded to an announcement on Kessben Fm and Television to send pictures of the living conditions of people who needed help was not sure of his chances but was surprised when a visit was made to Madam Pim to assess her situation for possible assistance. An old dilapidated rugged and collapsing rugs-stashed wooden structure much like a disused corn shack in a predominantly mud-cottaged farming community was all Madam Pim had for shelter over her head.

Land was provided by the Odikro of the village, Nana Bobbie Ansah II, and the construction of a sandcrete bed-seater detached house was started by Kessben Foundation to give the poor limping woman a more decent accommodation.

In a short ceremony in the village to hand over the completed house, Nana Bobbie Ansah thanked the Kessben Foundation for living up to their promise, seeing to complete the building for the poor woman whose poor condition of living had become a source of worry to the community.

Madam Ama Pim who was by herself over-joyed expressed gratitude to God for answering her prayers for a better shelter and thanked the Foundation for lifting her from abject poverty to a new life of hope. She prayed to the management of the Foundation to extend support to others in similar situations in the community. She explained that she became invalid at an early age after falling from a mango tree and fracturing a bone in her tight on a mango hunt in the forest. She said because of poverty she could not visit the hospital at the time and with time when the fracture healed, she was left invalid and could neither stand nor walk properly.

Tears of joy and gratitude to her Maker…Madam Pim kneeling to thank God.

The Foundation apart from handing over keys to the new house, provided her with various items such as clothing, cooking utensils, toiletries, foodstuff, furniture, a tv set, and curtains to make life much worth living in the new place. The Foundation also donated some bags of charcoal to her to start a new trade for sustenance.

In a short message on behalf of the Foundation, the General Manager of Kessben Media, Mr. Andrew Danso-Aninkora thanked the elders of the town for releasing land for the project and also thanked Mr. Dwomoh Sarpong for bringing the situation to the attention of the Foundation. He assured the community that the Foundation was poised to deliver on it’s promise at all times and called on all to support the activities of the Foundation.

Before cutting the tape to hand over keys of the house to Madam Pim, an Elder of the Aduana family of Amoaman Nana Nyarko Abronoma, Aduanabaapanyin said she was delighted the foundation did not consider the distance from Kumasi in rendering help and appealed for help to be extended to other institutions within the community.

Other dignitaries present at the ceremony included some Executives of the Association of People Living with Disabilities in the district, Hon Kwarteng Forster, the Assembly member for the area, Hon Addae Brobbey, Assembly member from Mampong, Mr. Sammy Adu- Boakye, programme host of bi Church Bells on Kessben Fm and Tv and project coordinator and some members of the Kessben Foundation.