By Goldenmedia.com (self meida writer) | 1 months 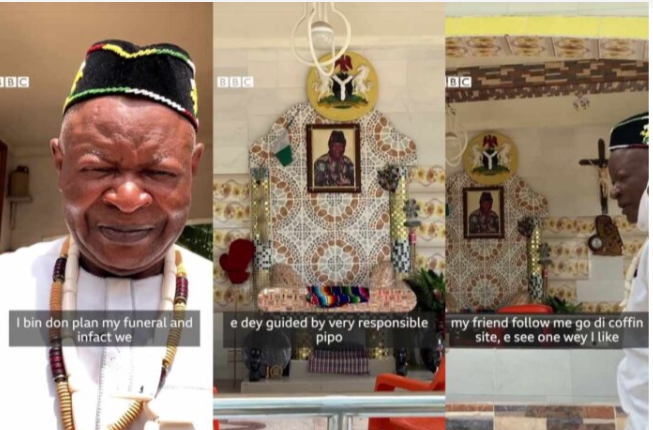 Chief Usoro, 73, Builds His Own Tomb As He Waits For His Death

Chief Doctor Clement Usoro, 73, has already planned for his funeral and bid his friends and loved ones by building for himself a tomb while he waits for his final breathe.Chief Usoro in an interview with BBC said he did so to save his family the huge cost that is usually incurred after a funeral. To him, it does not make sense to spend that much on a funeral anyway.The 73-year-old man built a 9x9x18-foot grave over which he has built a mausoleum. He has also acquired a casket which was a gift from his friend. Chief Usoro told BBC that he has written his will and continuously updates it as time goes on.As a chief, all the traditional requirements that are to be done before and after his death has been taken care of while he is alive. “My children know what to do when I’m gone,” he said.Chief Usoro has directed his family not to hold any form of ceremony when he passes because he does not want people to see him in that state for that matter, he tries his best to bond with his friends and loved ones while he is alive.“I have instructed them [my family] bury me within three days. I do not want to be kept longer than that. I have also told them not be display me for public viewing because I don’t want people to view me when I die.“Normally, the corpses I see when I go for public viewing of other people’s funerals are not pleasant. I do not want them to put foams in my nose,” Chief Usoro added.

Content created and supplied by: Goldenmedia.com (via Opera News )