Life is short, but it is full with problems. Every individual has issues in one way or another, but the problems of others are so vast that if caution is not exercised, you may believe you have none. The difficulties that some people experience nearly feel like a curse. When you learn about some of these concerns, you may find yourself unable to stop crying.

One such incidence occurred today on Oheneba TV. Even at her age, an 18-year-old young girl who is unable to regulate her pee and stools must wear diapers. When the mother was interviewed by the host on Oheneba TV, she stated that when she became pregnant, she went to Korlebu Teaching Hospital and gave birth to her daughter. They discovered a bulge at the baby's spine after the delivery. She was then told that due to the baby's condition, surgery would need to be performed as soon as possible. According to her, they had been doing laboratory tests for three weeks. After the investigation, the procedure was performed, and they were sent home. 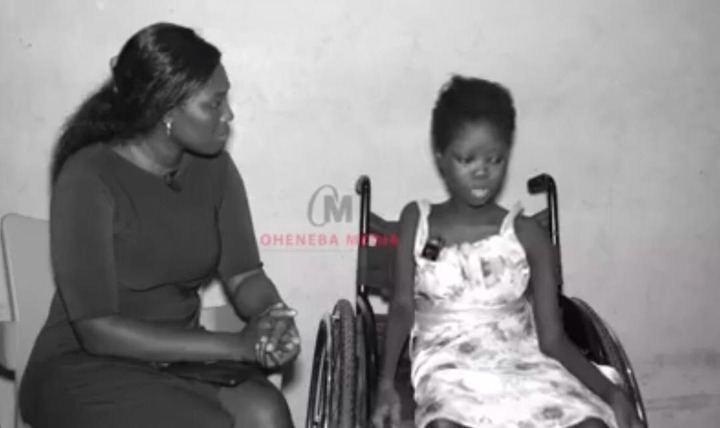 According to the mother, the child began walking at the age of nine months and was sent to school at the age of one year. However, around the age of two, it was discovered that she couldn't express it when she needed to urinate. She used to hit her because she believed it was one of those juvenile things. She went to the hospital later, but was assured that as the child grows older, she will be able to say it when she needed to urinate or relieve herself. Even at the age of six, though, it did not stop. As a result, when she went to school at that age, she had to put on diapers. Her classmate teased her as a result of this. After school, she comes home wailing, according to her mother.

Angela is now 18 years old, disabled, and still requires diapering due to her inability to regulate her feces. Her mother is now unable to work due to her illness, as well as the fact that she has attempted suicide multiple times. As a result, the mother is hesitant to leave daughter home alone. She stated that she wanted to end her life because she could see her mother suffer, which worried her, and she also felt sad when she saw her coworkers leave to school. She desired to end her life in order to put an end to everything.

Both Angela and her mother were spotted crying hysterically during the interview, pleading for help. Their predicament is quite tragic. We are hoping that others will come to their rescue.Below is the video link to the interview.