Three alleged kidnappers have been apprehended in the Northern Region.

By Lhana (self meida writer) | 1 months

Three members of an alleged abduction and robbery syndicate operating in Ghana's northern region have been arrested by the Northern Regional Police Command.

They were picked up from three different hotels in Tamale, Ghana's capital.

On May 13, police stormed the hotels and detained Yussif Mohammed, a 22-year-old herdsman from Akwadum in the Eastern Region. 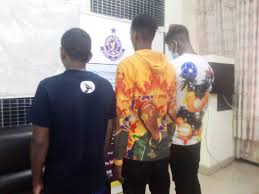 Police recovered a knife, seven cellphones, GHS5,861 in cash, and another GHS5,239 in their mobile money account, according to COP Bonga.

The accused were also unable to explain how they came into possession of the money, according to the police. They also declined to take police officers to their homes for additional investigation.

According to COP Bonga, the police have also recovered videos of the suspects lavishly exhibiting cash believed to be from robberies or kidnappings.

He did, however, make a plea to the general people to provide information that could help the police in their investigations.

The three are now being held in police custody and will appear in Tamale District Court on May 31, 2021.

COP Timothy Yoosa Bonga, the Northern Regional Police Commander, told the media in Tamale that the individuals were apprehended after police acquired intelligence.

They were believed to have arrived in Tamale and planned to carry out attacks and kidnappings in the areas of Salaga, Makango, Bimbila, and Wulensi.