19 year old Francis, confesses why he killed his brother.

By Joelofficialnews (self meida writer) | 22 days

Welcome to my platform, writing for Ghana's favorite entertainment news blog is what I love doing. I'm always bringing the best news to you. Don't forget to like, share, comment, and follow to enjoy my next article.

Exactly two weeks ago, it was reported that a young man had been stabbed to death by his own blood brother. Friends of the corpse from the Afiekwantimfi Municipality in the Western region claimed that they came to check up on Francis Ansong and his brother only to find out that Francis had murdered his brother. For the whereabouts of Francis Ansong, no one knew. Sources claimed he had fled out of the town. 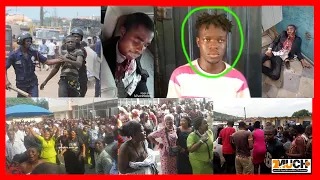 After the police got involved with the murder situation, Francis Ansong had been on the National Police department in the Western Regional's radar for 2 weeks until now in which he is currently been held in the prison for murder. After questioning and interrogations at the police station, Francis established the fact that he killed his brother because he owed him an amount of money which he decided not to pay.

Content created and supplied by: Joelofficialnews (via Opera News )

Remember The Lady Who Was Looking Sad On Her Wedding Day? Here's The Good Thing Happening To Her Now