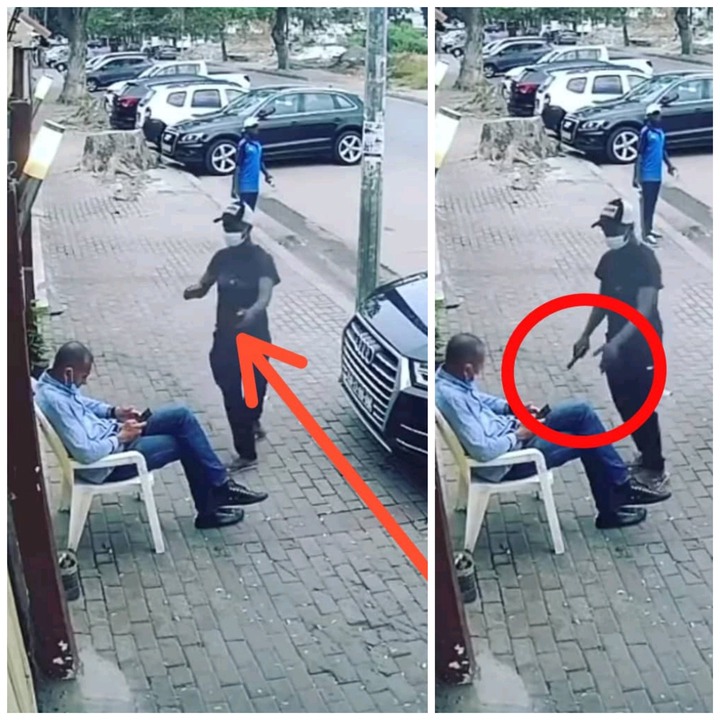 As people always say, the world is movie forward and everything in it continues to change. It takes to people's surprise how robbers of today attack innocent bodies. Unlike what we know to be at night, now the robbers attack in day time and even in the presence of large crowd.

Video making rounds on social media tells a sad story of how an innocent man in his corner landed in the hands of robbers. This was captured by a security camera launched at the crime scene.

The video identifies a man whose identity is hidden, seated in a plastic chair at a car park. The man was seated silently minding his own business, interacting with his mobile phone. The video also saw a man who was standing by the road side believed to be waiting for someone.

Suddenly, a man with face masked in a dark cloth wearing a cap, from no where got to the scene. The man seemed to be innocent at the beginning appearing the scene. The man getting to the man in the plastic chair showed no concern, passed as he moved towards the man the who is believed to be waiting for someone at the road side. The man almost getting to the other guy made a u-turn as he redressed back to the man in the plastic chair. He then went close to him, pulled out a pistol out of his pocket which he pointed it at the man. He then took the phone from the man and moved with it. The man looking frustrated and confused handed over to him the phone after which he moved to the side of the road.

The other guy at the side of the road attempted to come into his rescue but after discovering the robber have in his hand a pistol retreated paving way for the robber to head towards his destination.

Suddenly, man riding on motor believed to be his accomplice came at the scene just right after the mission was accomplished. The robber quickly got on the motor as they escape from the scene.