Chinese Man Spotted In A Serious Fight With A Black Man, Tries To Stab Him In The Stomach. 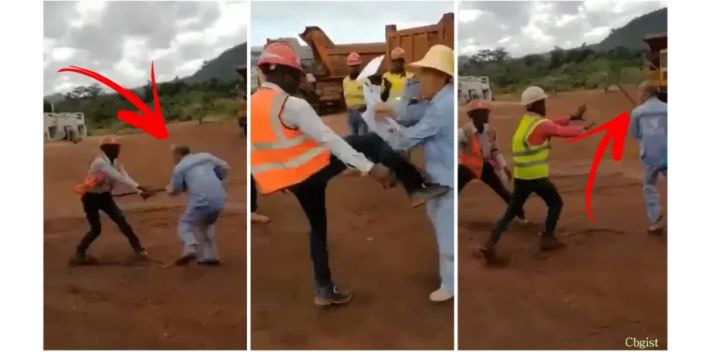 A Chinese national has been videoed during the time he got angry with a black man and started a serious fight with him.

In the said video, the black man was seen addressing his colleague blacks which looks like a meeting but the Chinese man who was standing at the other side was angrily shouting to the black man in the Chinese language.

Not being moved by the actions of the Chinese man, the black man continued reading out orders from the documents he was holding. The Chinese then approached him with a blow and the black also revenged with a strong kick.

The Chinese quickly rushed to pick up a spear stick and attempted to stab the black in the stomach but it missed. He then tried again and the black man took to his hills and run. The other black men couldn't help their colleague because anyone who tries to come close to the Chinese, he points the spear stick towards him to attack.

He kept running after the black man with the stick and then another black disrupted him and gave the man he chasing another chance to kick him heavily to the ground. He got up and continued running after him till he got tired and stopped.

Ghanaian musicic legend, Reggie Rockstone has reacted after posting the video on his Instagram handle, saying that his colleague blacks could have team up and help him but they stood there and watched the Chinese man chased him with a stick just because his skin is yellow, so they respect him than their black colleague.

What is your view about this? Drop your comments in the comment box below.

NDC sets to whip gov't in a press conference. Check out date, time and local stations to broadcast