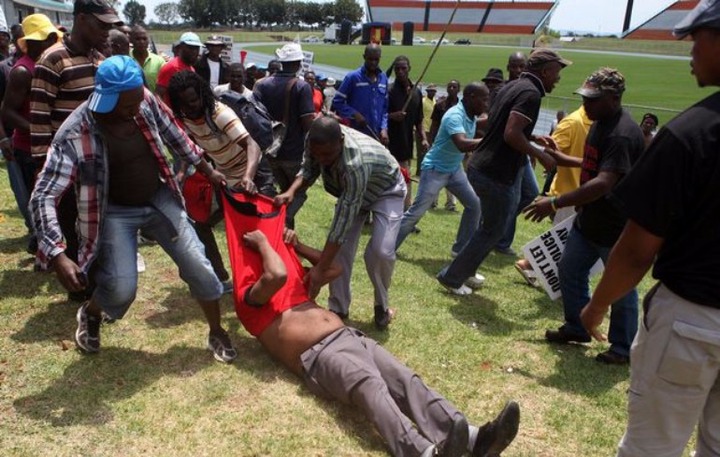 It is horrific the injuries the suspected thief sustained from an assault by some residents of Sekondi. The suspect thief was caught by some young men in the Ekuase neighborhood after a dawn operation went bad.

The suspect, Papa Dadzie is said to be a notorious thief in the community, who had raided the homes of residents over the past years. This time around, the residents never wanted to spare him but teach him a painful lesson so he never indulges in this crime again.

He was beaten into pulp and later dumped at Essei bridge in Sekondi. Papa Dadzie was later rescued by his family after news broke about the severity of his condition.

But the family failed to send him over to a hospital or clinic for medical attention. He died shortly after at the family house.

A Takoradi-based broadcast journalist, Nhyiraba Paa Kwesi Simpson confirmed throw an eyewitness account that the family’s refusal to send Papa Dadzie to the hospital for treatment made his condition worse.

It is suspected that Papa Dadzie suffered some severe tissue damage and internal bleeding hence his accidental death. No trace has been found of those who brutalized him.

The entire Ekuase township has been dead silent about this issue. No one had been able to mention a name of a suspect to this mob justice.

It is not certain if Papa Dadzie ever had the strength to mention the names of those who assaulted him. The case is yet to be reported to the police for investigation.

In the meantime, some family members are conducting some independent investigation to find out those who caused this. Ekuase, a suburb of Sekondi has not witnessed such crimes for quite a long time.

In fact, Sekondi-Takoradi has in recent times been acknowledged to have one of the most humane and corrective measures to domestic crimes as thievery. Suspects are made to execute some communal labour to compensate for the items they have stolen and also to avoid the police.