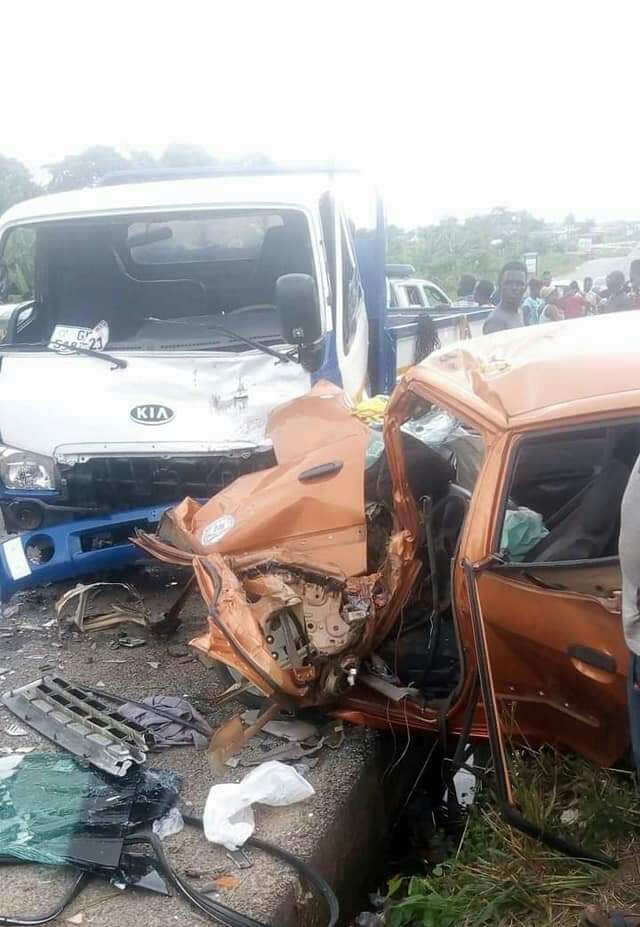 Kwame Danso, the driver of Kia Cargo Truck with registration number GG - 598 - 21 will be sentenced to Nsawam Prisons if found guilty of aiding an accident that killed two people on Monday evening. Kwame who collided with a taxi sedan car was still at the Nsawam hospital in handcuffs while doctors did their best to save him from death. Kwame sustained chest injuries after the accident and was rushed to the Nsawam hospital where doctors operated on him on Monday evening to remove all the internal bleeding wounds which could have caused his death. Kwame was doing well at the hospital when I spoke to him last night to know his side of the accident.

Kwame Danso is expected to be arrested when he is ready to leave the hospital and will be processed to the Nsawam municipal court where he will face all the crimes he is alleged to have committed. If Kwame is found guilty, he will be sentenced to a jail term of not less than twenty years and may also be fined in addition.

Case Study and cause of the accident

Kwame Danso who is a resident and native of Adeiso, a residential community within Nsawam Adoagyiri Municipality, was driving from Adeiso to Nsawam on Monday evening when he had an accident with a taxi sedan. Kwame was almost at Nsawam when the taxi driver who was identified as Solomon crossed him from his lane.

The taxi was coming from Nsawam heading towards Adeiso when the driver suddenly lost control of the steering wheels. The taxi driver from the police gathered information, lost total control of the taxi when the road became slippery for him. It was raining heavily and the driver of the taxi couldn't control his car in his lane and went into the lane of the the Adeiso road which was been used by Kwame Danso.

Kwame crashed the taxi on a head to head collision and the two people sitting in front of the taxi died on spot. The taxi driver as well as the front seat passenger did not survive the collision and died on the spot. The taxi driver had the driver side gate piercing through his stomach killing him on the spot without a word, while the front seat passenger had his chest crashing the dashboard of the taxi.

Kwame lost focus during the call and couldn't identify a distressed car was in his lane. Kwame was carried away by the call to the extent that, none of the continuous horns the taxi driver sounded was heard by him before crashing the car. Though it was raining and that might have distracted Kwame but first responders who reported to the scene to save survivors reported to the Nsawam police that, the horns of the Taxi driver was on for more than forty seconds before the accident happened and if Kwame was paying attention to the road, he would have heard or seen the taxi before crashing it.

Kwame Danso has been charged with abating a crime, negligence and making calls while driving. He will be arranged before the Nsawam Adoagyiri municipal court when he is discharged from the hospital. If he is found guilty, he may go to jail or be fined a higher amount of money. Both accident cars are still at the Nsawam police department while the injured victims are still receiving treatment.