Man, 59, to face jail for pretending to be blind

Man, 59, to face jail for pretending to be blind 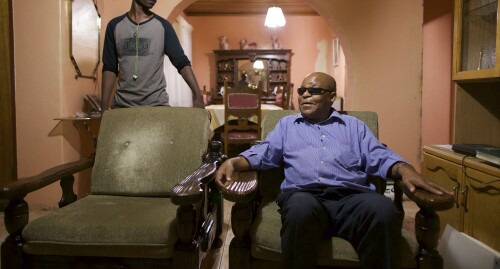 Augustine Tekyi, the 59-year old man who aided his wife by pretending to be blind, will face court tomorrow and possibly, jail if found guilty of murder. Augustine is been sued by the family of his late wife, for having a hand in the wife's death, all because of his choice in keeping the wife happy. Augustine who met his wife Adell, a game woman in Swefwi in 1992, forced his way to entice the woman to try him. Augustine was going for a revival with few brothers and sisters in Christ, when he came across Adell in the 90's. Adell after few communications with the man, gave him an option of come to see her parents, if he was in deed serious with his request of starting a life.

Adell who was branded as the Face of Swefwi in 1990 to 2000, was a woman who was naturally blessed other immeasurable beauty and unique features, that no woman was a competitor to, in the Swefwi council of beautiful women. She never pride herself of her beauty, despite the compliments from others within the council. Men saw her to be beautiful and elegant, whiles her fellow women saw her to be their spoke person in boldness and in public. Adell managed to have a small wedding in 1993, few months after meeting Augustine. The wedding which many was prevented from going, became overcrowded because the face of the Swefwi Council of Women, was getting married to one Augustine Tekyi.

Adell and Tekyi lived a peaceful life until 2000, when rashes started appearing on the

skin of Adell. She tried all the remedies she knew, and it was getting difficult to control. The rashes turned to black spots when they were dying, and that left ugly stains on the woman. Heavy pimples also added to the case of already black spot rashes, and that created a difficult task for Adell who was once a beauty face for several years. Augustine never felt comfortable, with how his wife was behaving, and he knew his marriage was creating a tension for the wife to suffer for the rashes. He kept thinking about ways to help his wife recover from the ugly nature the rashes were destroying her beauty, and nothing good came out of it.

Augustine after three months of his wife's ache pimples, rashes, and black spots, got a call to attend a funeral. The wife Adell couldn't join her husband because of the skin rashes she was having, and that gave Augustine serious doubts of his wife's future with him. Augustine Tekyi on his way from the funeral the wife refused to attend with him, had an accident and lost his sight. Augustine couldn't see again, after that deadly accident that almost took his life. He became reliable to his wife, and eventually lost his job.

Augustine through blind school was able to learn how to be dependent with sticks and do everything he wanted to do, and became adaptable after taking seven months intensive course training, at the school of blind. Augustine could see again through the touch of his hands, feel things and their colour by using the techniques he was thought at the school. With the aid of his walking stick, he became ok to do anything he wanted. The wife became happy and the husband became happy, and the once ever marriage which was dying because of Adell's skin rashes, turned to a happy marriage again.

They became happy than ever before, and was blessed with five children in the course of their marriage. Adell lost her beauty to the skin rashes and never felt bad of her ugly look again, because the husband was blind and couldn't see anything. Adell on the 23 of January 2021, suffocated and died in her sleep. The husband woke up in the morning, and his wife's body was very cold. He called the emergency line and the wife was confirmed dead, when the ambulance got there. Augustine lost his wife, and couldn't take it easy, but was able to go through the process by the help of family and friends.

It was during the burial of the wife last week Saturday, that the family and many people present at the burial of Adell Tekyi, got to know that Augustine wasn't blind, but he was assuming to be. Augustine, after he found out the inconvenience his wife was going through, could not allow his wife to go through that tough moments alone, and did something to help her ease the emotional trauma. Adell felt embarrassed as her beauty faded away because of the rashes, black spots, and and heavy pimples. Augustine forced the accident he had, that brought him to be blind. The accident happened while he was driving, but the blindness was lifted into the situation, so the wife can feel comfortable. Adell became comfortable and happiness was brought back to their marriage, when she found out the husband was blind from the accident. This saved their marriage, but the family of Adell, has turned the case into a murder case, accusing Augustine of murdering the wife so he can lead his normal life. The family claim, he couldn't tolerate the wife's ugly face again and murdered her whiles they were alone, and told everyone the wife died in her sleep. The case which will heard at the Cape Coast High Court tomorrow morning, will determine whether Augustine was involved in the death of his wife or not. And whether his actions of making the wife believe he was blind, aided to the death of his wife, as the family is making it seem. 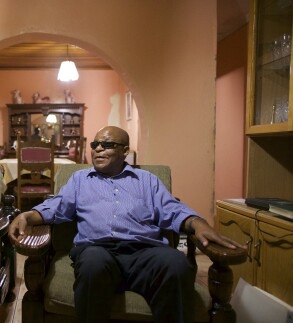 Ghana Police has arrested a woman who is the headmistress of prostitutes.