By Ghlinks (self media writer) | 7 months ago

Esi Arthur, 32, has been apprehended by officers in the Agona Swedru District Police command for killing her husband because of adultery.

Reports indicate the event took place in Gomoa Akropong in the Central Region.

Francis Anthony, 44, was identified as the deceased. 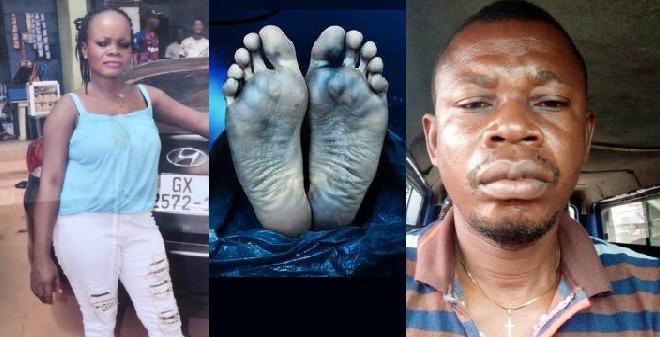 Anthony, the deceased's father, narrated the incident during an interview.

The suspect, according to his account, hit his son twice with a rectangular piece of wood, resulting in his instant death.

In addition, Ebenezer Nyansor, the deceased's in-law disclosed Esi Arthur plotted to kill her husband on numerous occasions because he had another child with someone else.

He explained that the concerns had been resolved until last night when the deceased's mistress called.

Since then, relatives and friends of the deceased have surrounded the headquarters of the Swedru District Police Command, demanding that the suspects be released for instant justice.

In the aftermath of their grievous loss, some family members wished to take revenge on the suspect for the way she behaved.