Goaso woman gives birth to a baby without arms - reports

By ThinkingMinds (self media writer) | 7 months ago

Goaso woman gives birth to a baby without arms - reports 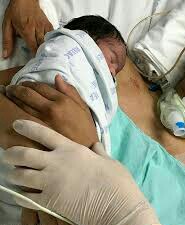 A 25-year old woman has reportedly given birth to a child without arms in what would be the first time such an incident has happened at Goaso hospital. The woman who has been identified as Zakinatu is a pothead carrier within Goaso.

Zakinatu's mother who narrated the situation to Thinking Minds was surprised by how her daughter can give birth to a child without hands, and believed the child has been cursed by their ancestors and town gods.

Zakinatu who was to work and find money to support her vocational education ended up getting heavy when one of the Goaso Taxi drivers promised to marry and support her education. The driver Umar lured Zakinatu to believe she was the only woman in his life, not knowing Umar had a wife who has been religiously wedded according to Islamic traditions.

This affected Zakinatu dearly when the news of Umar's wife and children got to her. Umar had his children and wife living at Peemba, a village near Goaso where he visited them every month. Umar was in Goaso to drive a taxi so he can get enough money to take care of his family when he met Zakinatu.

Zakinatu who was almost five months heavy at the time wanted to get rid of the baby because of the betrayal Umar had given her. She took food poison which was meant for rats, just so she could end her life, but her mother Immatu Abdulai was there to protect and save her.

She was taken to the Goaso Regional hospital where doctors and nurses did their best to revive and save both mother and unborn baby. Zakinatu did not learn lessons from what she had done and tried taking another drug so she could destroy her five-month unborn baby. She was rushed back to the hospital where both Zakinatu and her unborn baby were saved once again. Doctors threatened to arrest her if she tried anything again when she was rushed to the hospital for the second time.

The mother Immatu believe it is with these two unfortunate acts that have lead their ancestors to punish them with a baby without arms. Zakinatu gave birth to a healthy baby yesterday afternoon, but the child came with no hands. Except for the hands, everything else was intact for the day-old child.

Doctors of Goaso regional hospital declined to commit on the case that, they had not started any lab exercise on both the baby and the mother, and cannot confirm what caused the child to be born without hands.

Though Zakinatu may be the first to give birth to a child without hands in her family, but that is not something strange as many have been born both in Ghana and internationally. 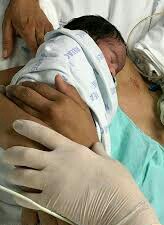