Matters Unfold: Kaaka's Brother Was In Nigeria For 18 Years Before His Return. 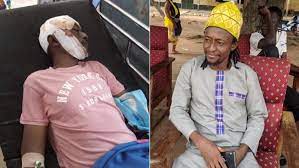 A caller from Ejura has unfolded all that goes in and out of the Ejura brouhaha. Mr. Ibrahim Papa Antarrio who is a trained teacher by profession has revealed that Kaaka was killed by his own biological brother, Iddi Mohammed.

Narrating the story to Paul Adom Ochere on the Good Evening Ghana Program, He said a lady who stays with Kaaka's family in the same house heard continuous sounds of beatings at around 2am on Sunday. Then suddenly, she heard a deep breath and then the sound ceased. So she came out to wake Kaaka's wife up as her(witness) husband was not available at the time. So on her way, she saw Kaaka's brother dragging Kaaka towards a hen coop. Upon seeing that she shouted and her shouting woke another woman who stays at their next door who also witnessed it as well.

He further alluded that after the case was reported to the police, no arrest was effected which led us into this current state.

"He has been in Nigeria for eighteen years. But after his return he has had series of scratches with his family members mostly with Kaaka, Kaaka's wife and Kaaka's mother. He mentioned that Mr. Iddi Mohammed who is currently under the police custody had been arrested and detained for two days at the Ejura police station, after Kaaka's mother reported him to the police for threatening to kill her, her son, Kaaka and Kaaka's wife. This same person was again arrested for threatening Kaaka's mother's life"

The 37 year-old teacher said, he was born and bred in the same community and he stays and teaches in a school in the same Ejura. He however blamed the police and the chief for failing to take matters early leading to all these troubles.

University Teachers Association Of Ghana (UTAG) To Go On Strike.