A Man Slept With Another Man's Wife; He Tried To Flee But Died After Falling From A Storey Building

There are some people who have made up their minds that they will never stop chasing other people's wives and husbands. These usually go to the houses of the married couples and have fun with them while their spouses are not around. The young man in your picture has been recorded on camera running away after sleeping with someone's wife.

Observing the video, you can see that the wife's husband was overheard shouting that his neighbours should help him catch the young man running on the edges of the windows. Most of the neighbours started opening their windows and making attempts to hold the legs of the guy. The structure is a storey building so with any little mistake, the guy could fall.

One of the neighbours in the storey building opened his window and held the leg of the guy but the struggled with him and get his leg off his hands. You can see that this guy was seriously shivering while trying to run away from his sins. While running on the edges of the window, another neighbour opened his window. The window hit the guy and he fell from the storey building. 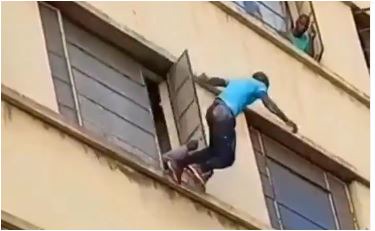 According to the person who posted the video on social media, the young man didn't survive the fall as he passed away. Some social media users after watching the video said that this is a lesson to people who have been sleeping with married people. 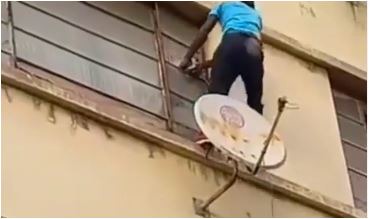 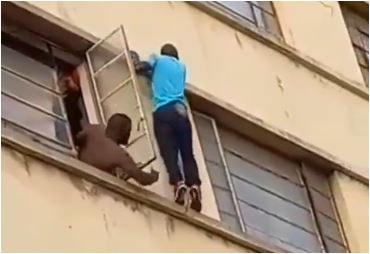 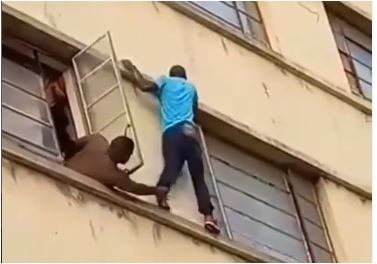 New: Brave Unemployed Graduate From UG Stands By The Roadside With A Placard Begging For Job.

“ We Are Not Going On Strike This Time Around, This Is What We Will Do”-UTAG President Voices Out.

Self Discipline Is A Bridge Between Goals And Accomplishment

Ladies, Doing The Following Things, Will Make Your Man Tire Of The Relationship

All Teachers Embark On Indefinite Nationwide Strike; Check Why And How Government Intervenes