By BeaNana (self media writer) | 7 months ago 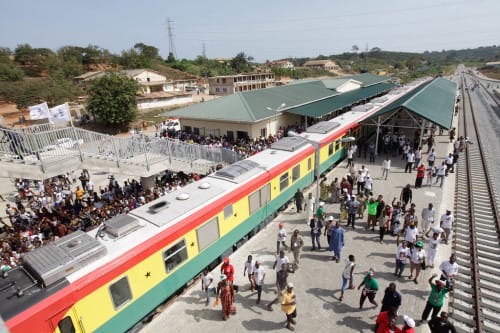 A moving train has killed a young man in Kojokrom, a community in the Sekondi Takoradi Metropolis of the Western Region.

The sad incident happened on the evening of Thursday, May 6, 2021. Residents in the community woke up on Friday morning and found the lifeless body of the young man whose name has since not been given lying beside the rail line.

Parts of his body have been cut into pieces by the train. His slippers were found lying in the railway line with onlookers wondering what he was doing at the place on the hour.

“We woke up in the morning and realized he had died. We don’t know his name but he lives in one of the uncompleted buildings around with his friends. He does not hail from this community and none of his family members has also been here before”. Kwesi Ackon He added.

At the accident scene, the lifeless body of the young man is seen lying in a red shirt and jeans trousers. He is tall and dark in complexion. The hands and parts of his legs were sliced by the train

At the time of filing this report, the police were yet to arrive at the scene to convey the dead body. However, onlookers have covered it with leaves.

The Kojokrom to Takoradi Stretch of the railway line has recently recorded several of such accidents. A commercial vehicle recently crashed a speeding train on the same stretch. The vehicle was damaged beyond repairs with the driver of the commercial vehicle sustaining various degrees of injuries.

I saw you struggle for our education' -Widow, 69, gets a brand new customized car from her children