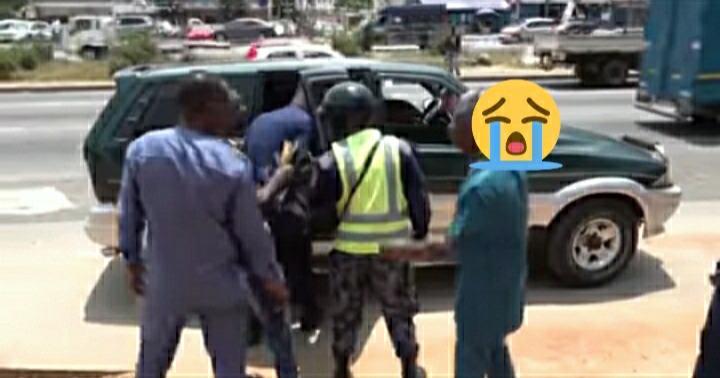 A 23-year-old level 100 student of the University of Ghana, Legon is currently in the grips of the police for allegedly murdering her boyfriend at Ashaley Botwe School Junction in the national capital, Accra on July 24.

The Twenty-three-year-old whose name was identified as Safina Mohammed Adizatu, according to the police, was assisted by one Michael Fiifi Ampofo Arku a Technical Officer at Legon, in committing the crime. The police narrated that the deceased, Frank Kofi Osei, was a Ghanaian domiciled in Canada who had come to the country on vacation.

Safina also known as Safina Diamond on social media and Arku are said to have stabbed the deceased several times on his chin, jaw, back and strangled him to death.

According to the Police report, the deceased visited the his fiancee now the accused, Safina on the night of July 24, and decided to spend the night there. At midnight, Safina and her accomplices pounced on him, stabbing him severally with a knife on his chin, his jaw and back and finally strangling him to death.

Safina and Arku who is the known accomplice, cleaned the blood on the floor in the room and dragged the dead body through the staircase from the top floor of a storey building to the gate where the deceased had packed his Toyota Tundra, and wiped the blood off the staircase. She later called the police to alert them of an incident that her boyfriend visited her but something happened and he died in her room.

The police upon arrival, saw the dead body at the gate. The victims were however nowhere to be found. The police later found Safina at the Ashaley Botwe School Junction. Michael Arku, her accomplice was found at Kumasi, in the Ashanti Region. However, further investigations show that there might be other accomplices. Efforts are thus on being put in place to ensure that the rest of the accomplices are arrested as soon as possible.

The duo was arraigned before the Adenta District Court and charged with conspiracy and murder, and are currently in police custody. They are to appear before the court on August 12.