"Send Her To Prison", Ghanaians Reacts Over The Death Of A Girl Killed By Her Nanny (CCTV Footage)

By KofiLegit (self meida writer) | 25 days

Following the recent Incident that recently happened in Accra, where a 54-year-old Nanny allegedly strangled an 11-month-old baby to death. There has been a lot of controversies over the tragic death of the girl, which made Ghanaians react by Stating that it is best that she is sent to prison. 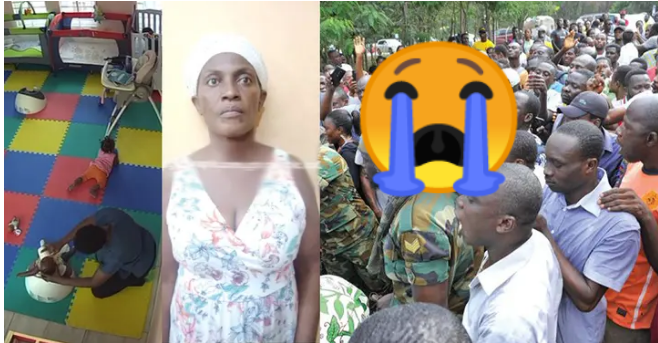 According to the information gathered by Local Media, the Nanny whose name was given as "Clara Ayani Ampa" denied to have killed the girl while she was been interrogated by the Police.

In their statement they said:

"What could have made this 54-year-old Nanny to commit such atrocity against this little girl. If she can do this to this 11-months-old baby, she can as well do that to other kids. So it is best she is sentenced to life imprisonment", One Vivian Said.

"If the Police released this woman after this act she has done, there is every tendency that she will still carryout the same act. So sending her to jail is the best Option", Another Ghanaian Said.

 But after the CCTV footage showed how "Clara Ayani Ampa" was strangling the hands of the young girl at her back, and choking her with a substance believed to be a "Porridge in a cup", Ghanaians took to their respective social media accounts to react over the incident, where they insisted through their respective post that she should be Jailed.

Meanwhile the Parents of the girl who reported the case to the Police in Accra, released the copies of the CCTV video as an evidence of their allegations.