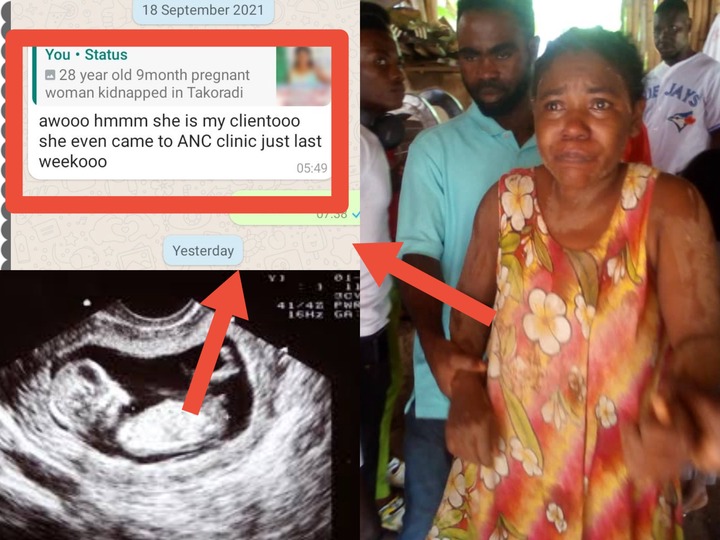 Some fresh evidence surrounding the alleged kidnapping of Josephine Panyin Simson is emerging following an announcement by the Western Regional Minister, Kwabena Okyere Darko Mensah that the former per medical reports ‘faked’ her pregnancy. This commentary by the Regional Minister has sparked anger among the family of the victim as they are bent on challenging the medical report allegedly produced by the Axim Government Hospital, where she was admitted yesterday.

Reports from Computed Tomography (CT) scan have been produced by the husband to dispute the recent one which the Minister has concluded on. The police have been accumulating this evidence for further interrogation to determine the facts of the case.

In this quest for the truth, a screenshot of a WhatsApp chat between a nurse [name withheld] of a hospital Josephine has been attending for antenatal, and Nhyiraba Paa Kwesi Simpson, a journalist based in Takoradi with MEdia General's Connect FM, has surfaced. The chat, dated 18 September 2021 was taken just two days after the police reported Josephine’s abduction. 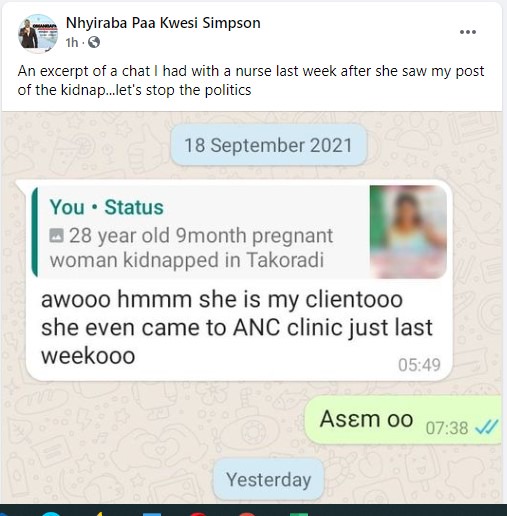 In the chat, the nurse confirmed that the victim was her client, and has been receiving antenatal care at her facility. The message read; “awoooo mmm she is my client. She even came to ANC clinic just last week.”

This was an expression of empathy to a publication of her picture by the journalist when the police reported the incident.

Early this morning across several platforms, the Western Regional Minister, Kwabena Okyere Darko-Mensah who doubles as the head of the Regional Security Council disclosed that a medical report filed by one Dr. Jerry Attobrah, suggested the woman wasn’t pregnant nor had delivered a baby. The husband, who was listening through the conversation on Takoradi-based Skyy Power FM broke into tears when he heard the Minister tagged the pregnancy as ‘fake’.

His claim that the wife was 9-month pregnant when the incident happened had by a single interview been thrashed. For him, it was an insensitive comment by the Minister, especially when he demanded that the police cause them [victim, husband and mother] to be investigated.

The Police following the incident had coiled into silence as attempts to reach the Regional Command through the Public Relations Officer, ASP Olivia Adiku had failed. Sources say the police have resorted to decline any interview until they are done with their investigations.