Dream Turns Bloody: Man Kills Friend He Saw Sleeping With His Fiancee In A Dream

By Edoukwah (self media writer) | 14 days ago

Crime rates in Ghana is on the rampant as increasing news of it keeps coming in day in and day out. You wake up today and all you hear is someone has been stabbed to death. If it's not that one, the someone has been shot dead or even beaten to death.

The cause of these high crime rates is mostly anger and some incredible reasons. Some people have ended up in prison just because their friends were either owing them or did something they didn't like hence stabbed them to death or even beat them to death.

A man by name Kwadwo Adusei has done the unthinkable based on a funny and incredible reason. This man has killed his own friend with his reason being that, he dreamt and saw his friend having an affair with his fiancee.

Kwadwo Edusei is a palm wine tapper who has eight children, with eight different women but currently staying with two of his children's mothers 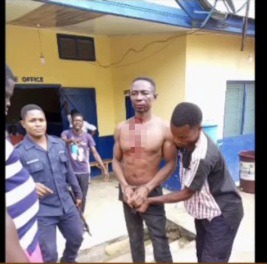 This incident according to UTV's reporter Rexkin Ohene Boateng, happened in Wawase a suburb of Kumasi in the Ashanti Region. The suspect invited his bosom friend in the person of Kwesi Banahene who is 48 years old to the farm where he does his work and stabbed him in the neck till he died.

Initially, the 48-year old deceased was believed to have been missing but later found dead and looking at his state, someone stabbed him to dead. It was later found out that Kwadwo Adusei was behind his death.

When asked why he did such an unpardonable thing, Kwadwo Adusei revealed that tee way his friend was bonking his fiance made him really scared. So to prevent the dream from becoming a reality, he had to do the needful that is to kill his friend.

The suspect is currently in police custody.