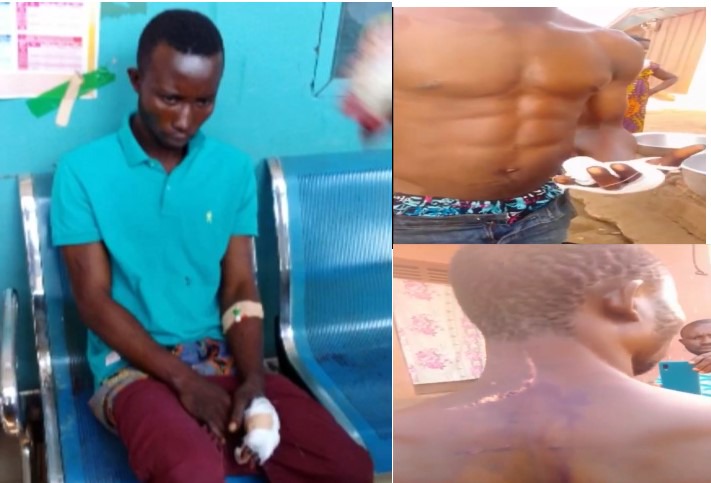 Dada Ben, a twenty-six-year-old man was found unconscious in his room with stains of blood on the walls and on the floor where he slept. The mother was alarmed by the cuts and bruises on his back and blood oozing from his left hand.

Dada Ben was rushed to the hospital and luckily was resuscitated by the doctors. It was upon gaining consciousness that he told the mother how he had been brutalized by a bar operator in the community.

This incident happened at a popular drinking spot in Techiman-Tsia of the Tano South District. Upon interrogation, Dada Ben disclosed that he had stepped out to enjoy a bottle of beer at Big Alex’s spot but failed to pay for the drink.

He mentioned that his plea to have one of the bartenders accompany him to the mother to fetch some money to pay for the bill was turned away. The owner of the bar, Big Alex allegedly bounced on him with sticks and other unidentified objects.

They felt he was playing a trick on them and had to teach him a lesson. But things got pretty bad. Dada Ben nearly got his left hand chopped off. Having assaulted him, Big Alex dragged him from his bar.

Dada Ben managed to find his home amid pain and drunkenness. It is said that the victim has some mental condition that impairs his thoughts and behaviour. According to the mother, almost everyone in the village knows that about the son, and as such Big Alex could have reported the matter to her than brutalized him.

In the meantime, the case has been reported to the Techiman-Tsia police station for investigation. However, no official summons has been served on the accused, Big Alex. The police had only persuaded the mother that Big Alex is to report to the station for interrogation next week Monday.

But many residents fear the case will end up being thrashed because Dada Ben’s family are poor. The only thing they could do now is to help Dada Ben tend to his wounds and get healed from the trauma.